Thereâ€™s a damn good reason why the original Tribes has a cult following: branching off from Sierraâ€™s quasi-obscure Starsiege universe, Tribes offered the perfect blend of team-based gameplay and first-person-shooter thrills. But the big kicker was the game environment. While other games locked you into stinky dungeons and claustrophobic nuclear weapons facilities, Tribes took deathmatching outside, with its sprawling mountain ranges and miles of rocky terrain.

After two years of semi-underground status as a beloved online shooter, the clamoring Tribes-masses have been waiting patiently for the arrival of Sierraâ€™s much-touted sequel. After announcing that it would feature a single-player training mode designed specifically to make the Tribes universe accessible to newbies, Sierraâ€™s delivery of Tribes 2 may be the biggest “quiet” event of the gaming year.

At its core, Tribes is just Capture the Flag. With turrets. And power generators. And multiple armor classes. And mines and sniper rifles and long-range sensors. If you havenâ€™t played the original Tribes before, thereâ€™s a good chance that Tribes 2 is going to kick you in the ass for a few weeks, or at least until you grow accustomed to the ungodly number of strategies that drive the game.

While games like Unreal Tournament and Counter-Strike can be played independently, with each player doing his or her own thing, Tribes 2 requires you to work as a team if you want to succeed, and indeed to get any real sense of purpose in the chaotic, sprawling environments. Capturing the flag is a Herculean accomplishment, requiring you to communicate with teammates in a combined effort to knock down turrets, disable enemy sensors, and escort flag-carriers. Fortunately, giving orders and accepting computer-assigned tasks is pretty easy — the traditional Tribes voice chat menu is back in full effect, and you can bark out various phrases (and insults, such as the infamous “Shazbot!”) with a few simple keystrokes. A variety of character voices are included for variety. Tribes 2 also includes microphone support for broadband gamers, allowing you to strap on a headset and dole out the chatter. (Note to the bandwidth-impaired: turning off the mic feature can result in big-time lag reduction.)

So whatâ€™s new? Tribes 2 lets you cobble together your own loadout and combine armor types with special weapons and attacks. The game has a handful of preset “classes,” though itâ€™s possible to edit together your own for that personal touch of destruction. Each player is given a jetpack, as well. But the coolest addition to Tribes 2 is vehicular combat. A large percentage of maps feature a Vehicle Base, where any player can “spawn” a limited number of armored personnel carriers, bombers, and grav-cycles. The only downside to Tribes 2 is that itâ€™s still a bit on the chaotic side, and few people — apart from close-knit clan members, anyway — pay any attention to the orders system. While every player can bring down an overhead RTS-style map and dish out orders to their team members, whether or not anyone follows your commands is another matter entirely. And no matter what you do, youâ€™ll always have players that make poor team-mates – whether because they refuse to follow orders or just can’t play the game properly.

But as might be expected, playing the game with bots isnâ€™t nearly as much fun. There are a half-dozen training missions designed to get you up and running, but they barely scratch the surface of the gameâ€™s complexity. Itâ€™s easy to set up and run a game with 16 AI bots, but the resulting gameplay is pretty dry. Jump into online multiplayer mode and you’ll find where Tribes 2 truly shines. 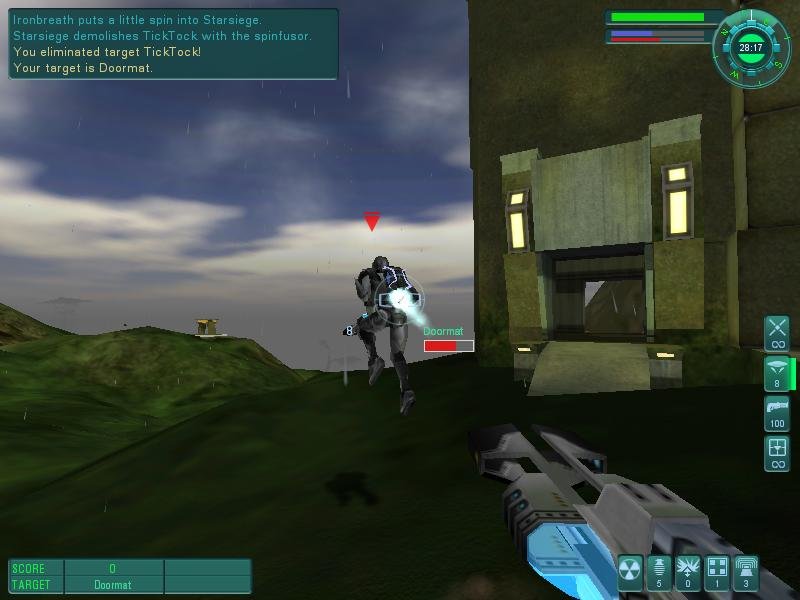