Build it up then raze it to the ground. 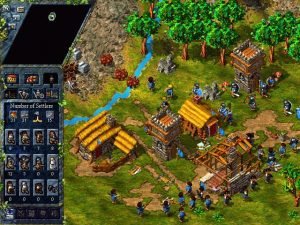 Blue Bytes’ series of economic sims were much more successful in Europe than in the States, making a third revision a fairly safe bet. For those unfamiliar, The Settlers III puts you in charge of one of three tribes. You need to build an infrastructure, expand borders, and eventually fight the enemy. The workers of the game are not controlled directly as in conventional strategy games; instead, you merely specify where to place buildings, and they do the rest, while regular soldiers are ordered around your settlement to defend the workers.

So what’s new in this version? Besides the higher resolution graphics, the biggest change is that there is no more road construction. Instead, you worry about finding the ideal spot to place a building and then your settlers will wear down paths naturally. Territorial boundaries work differently: once you’ve established control of an area, the only way the enemy can get it away from you is to take over all of the guard towers influencing that area. Overall there’s a stronger focus on battle than in the second Settlers game.

Three civilizations fight each other, and for the most part each sports the same types of units and buildings. The few exceptions create subtle differences, but nothing as markedly different as, say, the three races of StarCraft. As such there’s not much to see when you’ve mastered one of the three civilizations, and since you have access to all the buildings and units from the start of a campaign, there are never any new advanced toys to play with.

The AI is hopeless. This isn’t such a big concern in the campaign missions, which are crafted so that both enemy settlements and geographic location act as obstacles to overcome. But the poor AI makes the “skirmish mode” useless. Even in the campaign game, you’ll be halfway through the second campaign before being seriously challenged. A visit to a tranquil Roman temple.

The Settlers 3 appeals to the builder and the destroyer in you. The first phase of a scenario is spent building your settlement, having that SimCity appeal. You’ll need farms built, and metalworking shops. Barracks and temples. Housing for your peasants. There’s never quite enough room or quite enough materials to get it all done. And then you move on to the military phase. Then your troops destroy enemy buildings, leaving behind raw materials for your settlers to scavenge. It is perhaps a tribute to the fundamental design of Settlers III that even with all the little gripes and problems, the core game is still fun to play.