Swarog is a low budget, Russian-developed real-time strategy game that plays like a poor man’s Warcraft 2. Lead either the Kranks or Luzhevyans in several canned scenarios as they build, raise armies and eventually clash with each other on really small and uninteresting maps. Four resources are available – food, wood, ore and gold, plus a handful of buildings that allow you to train regular troops and help maintain your economy (Huts, Barracks, Blacksmith Shops, Shooting Ranges, etc). More advanced units include flying machines and ships. 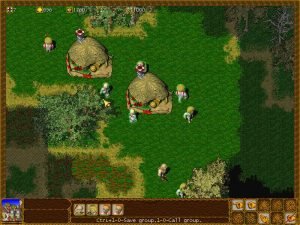 None of this will strike you as original, and a streak of interface and design issues – such as not being able to examine the hitpoints of enemy units and the extremely slow building/razing duration of structures, both friendly and hostile – make the gameplay very annoying. And AI is a dumb as a post, naturally, and there’s no multiplayer. The primitive graphics don’t help either – they don’t even match the quality of Warcraft II. In fact pretty much nothing in Swarog can match the quality of Warcraft II, making it little else other than a foreign curiosity.