Comparisons with the Indiana Jones movies were common when the first Tomb Raider came out (Lara Croft was often nicknamed “Indiana Jane” by players and reviewers alike). With Indiana Jones and the Infernal Machine, the concept has gone full circle, borrowing elements from the first Tomb Raider game whilst retaining the flair of the movie series to deliver an action-fueled experience like no other. The graphics would be powered by Lucas Arts’ proprietary Jedi Knight engine, and the gameplay, owing much to classic action adventures, would be a blast. That was the plan, anyway.

Set in 1947, Infernal Machine replaces those nasty Nazis Indy thwarted so often in the past with Russian scientists, spurred on by the escalating Cold War to find the ultimate weapon – and just like the Nazis, the Commies are focusing their search on the myths of ancient history. This time it’s the Tower of Babel, which head Dr. Gennadi Voloonikov theorizes was actually a machine capable of unleashing the power of a Babylonian god. As Indy, you’ve got to find the four missing parts needed to make the machine work.

In a move designed to appeal to gamers more than to fans of the Indy flicks, LucasArts has supplemented our hero’s pistol and whip (which Indy can use to haul himself up to normally unreachable locations) with an arsenal of more powerful weapons: You’ll get to use a rifle, machine gun, hand grenades, and a bazooka. Despite the beefed-up weaponry, however, combat isn’t the Infernal Machine’s central focus. Even with an auto-aiming feature, Indy’s sluggish turning movements make it frustratingly tough to kill soldiers and critters.

Combat in The Infernal Machine is disappointing, given the spread of weapons and the potential for fun with a whip. The whip is primarily a tool for getting past scripted swinging and climbing locations. The guns are automatically aimed, and this can be troublesome since you can’t lead your target. For some mysterious reason, LucasArts decided to forego the traditional health bar to show how close Indy is to shuffling off his mortal coil. Instead, there’s a dial that counts down through different colors, a bit like in Resident Evil games. Combat, as a whole, is a bit of a dud.

That leaves us with the puzzles, which have their own problems. But far worse than being derivative is the fact that this game is entirely oblivious to the fine line between fun and frustration, that subtle distinction that separates challenging puzzles from discouraging obstacles. The former make you want to keep trying new solutions and exploring different options. They light up sparks in your brain when the synapses fire and the solution clicksâ€”you know before you try something that it’s going to work because it makes perfect sense. The latter just make you want to turn your computer off. Although some of the puzzles are clever (the Fish/Jaguar/Bird gears and parts of Nub’s Tomb) and some are truly epic (Olmec Valley and the Palawan volcano finale), most of them are maddeningly obscure. They will leave you asking “How the hell was I supposed to figure that out?” Most of the game is spent running around with little sense of purpose or even a goal. At times your dropped off into a level without a clear indication on what you’re supposed to do. A simple X shows when opening the map, and it’s up to you to navigate to it.

Players who have played through another Indiana Jones classic, Fate of Atlantis, will be left somewhat disappointed with The Infernal Machine. But more importantly, even players who have gone through Tomb Raider will be somewhat shocked by the lackluster controls, disjointed puzzles and derivative story. It’s just not a game that is truly worthy of the brand. 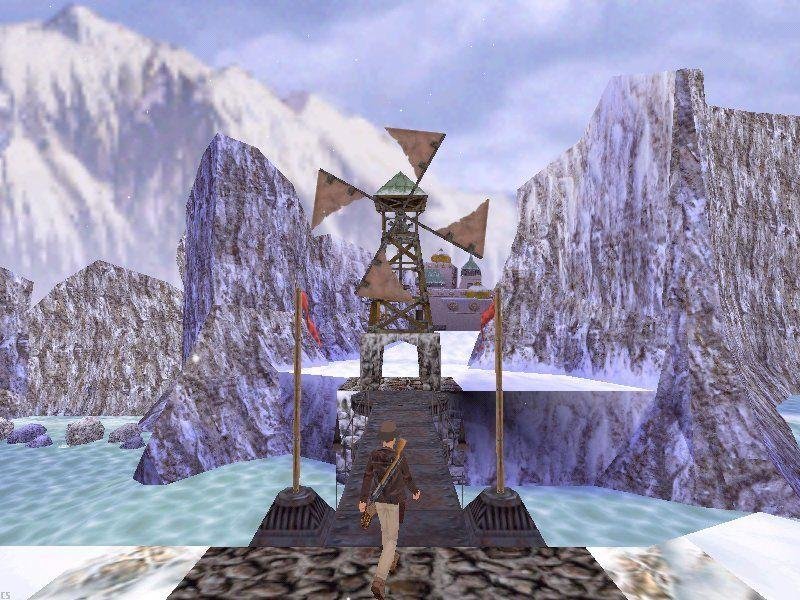