A careful study of rural America this is not, as Redneck Rampage sports just about every moonshine-swilling, loose-toothed, hilbilly stereotype there is. Two country bumpkins, Leonard and his useless inbred sidekick, Bubba, are out to blast some aliens who’ve had the nerve of stealing their pet swine Bessie. You only play as the better half, Leonard, as he shoots his way through fourteen levels scattered around the town of Hickston, Arkansas (seriously guys, ‘Hickston’?). These yokels aren’t the brightest of the bunch, but they come in two flavors – dumb and this guy.

What I like most about this game is the way it feels like a theme park. It’s redneck from top to bottom, starting with the levels, enemies and weapons and ending with the country soundtrack and interface written in broken southern English. Hell, even the manual isn’t really a manual, but a mock Hickston newspaper, with the cover story reading “Arkansas Farmwife Gives Birth to Alien Cow Baby!”. Not very useful, but still a novel approach to getting that freaky feel through. And with such emblematic destinations as the local drive-in theater, bowling alley, trailer park and dairy farm, it’s hard not to just kick back and enjoy the halfwit humor while shooting prancing turds.

Let’s continue with the good. There’s no doubt in my mind that Rampage is the best looking Build game ever made. The levels look great, not in the least thanks to the clever texture work that gives the world a nice illusion of light and shadow. Enemies and weapons are still badly animated, pre-rendered 2D sprites, but have enough detail in them to please the eye. The levels are also noteworthy for offering a good balance between indoor and outdoor areas, with plenty of dirt roads linking the many farms, barns and watering holes in each level. One of the best parts in this game is simply admiring the architecture, which doesn’t look all that 2.5D to begin with.

Pass me the can of whup-ass, will ya? Power-ups include cheap booze and filling your face with apple pies and pork grinds. The way this game deals with health is rather different than most action games out there. Consumables, which count as inventory items, regain your lost health but have negative side-effects if taken in large amounts (eg: drinking too much beer gets you drunk while eating too much pork grinds gives you some awful gas). These two work in tandem and are measured by two meters located on your HUD.

Getting drunk is your worst nightmare – the controls go crazy and your vision gets skewed, making the game unplayable. To get sober you gotta munch down food or wait a few minutes for the drunk effects to wear off. Overeating results in a torrent of farts, which messes around with your balance and alerts nearby enemies. Happen to find yourself too drunk AND stuffed with pies? Find a crapper and take care of business. Pure comedic genius!

The levels are loaded with fine details, yet you can’t really tinker with the environment all that much. Like all Duke 3D clones, you’re required to search for keys and occasionally solve lightweight switch puzzles. The key hunts are by far the most frustrating – not only are the blasted things really small, but you can never be quite sure which key opens which door. Switch puzzles aren’t as common, but will still give you headaches from time to time, like in the absolutely horrible Sewer level. The game has a nice collection of enemies – two variants of gun-totting hicks, giant aliens, giant prancing turds and the local sheriff to name a few. Some of the more advance enemies in this game are damn hard to beat, like the alien grunt that needs five or so dynamite blasts to bring down (plus it respawns unless gibbed). Then you have these cyborg vixens that have Austen Powers machinegun breasts. The toughest foe in the first episode isn’t some gun-wielding hick, but friggin’ dogs that bite your lifebar down to zero in seconds.

Although Rampage isn’t the most playable Build-powered game ever made, it is a damn fun ride all the same. It simply oozes atmosphere, with some of the most interesting levels and enemies around. All of it makes it worth heading south for. 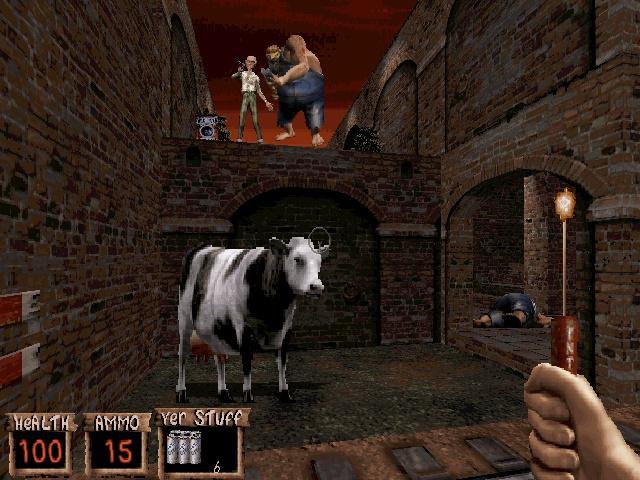 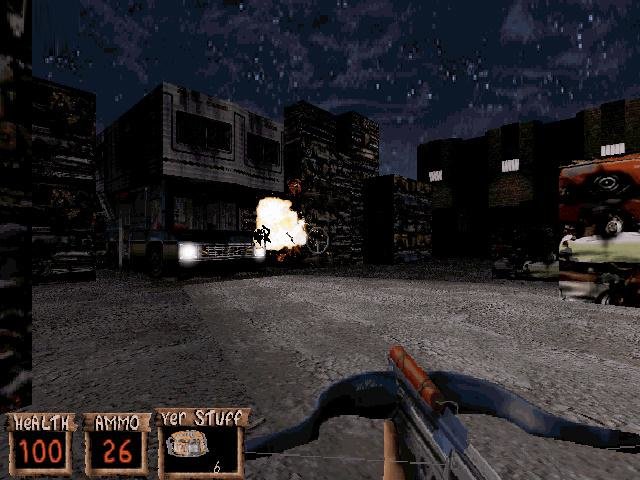 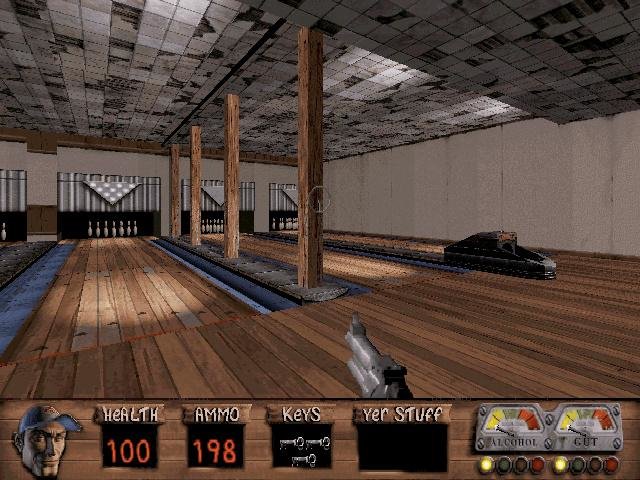