When Intel announced its line of MMX processors in 1997, a handful of MMX-enabled games were announced that promised to show off the new chipâ€™s abilities with features like colored lighting, blistering framerates, and Dolby sound. Among these showcased titles was Fenris Wolfâ€™s Rebel Moon Rising — a first-person shooter that could have been an impressive game if it had come out right after Doom, but in the face of competition from Quake, Hexen II, and Jedi Knight, Rebel Moon Rising is a second rate shooter by any stretch.

The problem with Rebel Moon is simply that it looks old and dated, despite the MMX enhancements. Rebel Moon has the same visual flatness of a game like Doom, lacking slopes, bridges, and levels-over-levels, and it hammers home how spoiled weâ€™ve become by the sleek 3D engines powering todayâ€™s hottest games. Even at 800×600, the textures in Rebel Moon are pixelated, and there are some perspective correction problems. The 3D world just doesnâ€™t have the solid look and feel of the rest of the current first-person shooters — especially the 3D enhanced versions. Your enemies are chunky sprites, and your ability to look up and down is as limited as it was in Heretic.

Rebel Moon does have its merits. The mission-based levels seem interesting — at least until you get past the briefings and actually start playing. To give credit where itâ€™s due, the missions are varied and intriguing and fit in with the background story: A futuristic version of the United Nations has becoming a corrupt ruling force and taken over moon colonies, and you, of course, play a freedom fighter determined to overthrow their rule. In a given mission, you may have to defend a target of the UN, sabotage enemy equipment, assassinate a leader, or escape from a stronghold. The problems lay in the level design and in the gameplay itself.

The maps are boring and donâ€™t vary too much from one mission to the next, and the effect is compounded by a limited number of wall textures. Far too many levels boil down to aggravating switch hunts once youâ€™ve killed all the nearby enemies. On some levels, when you finally find a switch and activate it, youâ€™re given some cryptic message about exactly what it did, such as “stairs raised” or “passage on second level opened.” There isnâ€™t much logic to the locations of the switches, and most of the time youâ€™re left to search the map to find the stairs or passages they control. The arsenal of weapons you build up throughout the game consists of various ray guns, a rocket launcher and, of course, a railgun. They give way to the one area in which this game truly excels: the light sourcing effects of weaponsâ€™ discharge is really cool. Reminiscent of Descent, the bolts, rockets, or rays light up the surrounding textures in brilliant colors. Firing the weapons also produces the only cool sound effects youâ€™ll hear in this game; the enemiesâ€™ voices sound like theyâ€™re coming through a broken speaker from some cheap elevator.

If you have a microphone, Rebel Moon boasts support for voice input through the use of IBM VoiceType software. The recognition is very reliable once youâ€™ve “trained” the software to recognize your enunciation by reading phrases into the mic. Itâ€™s used mostly for communicating in team-oriented multi-player games, but you can also use speech in place of the keyboard for various commands such as changing weapons, adjusting the gamma correction, jumping, firing, and so on. Thereâ€™s a delay after you speak before your command is carried out, so donâ€™t plan to use it for well-timed jumps or with any accuracy. 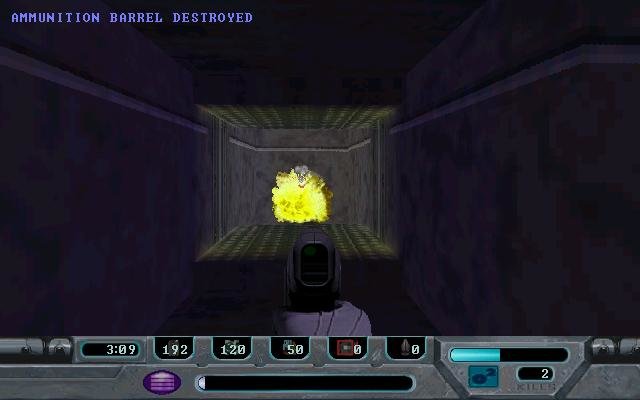 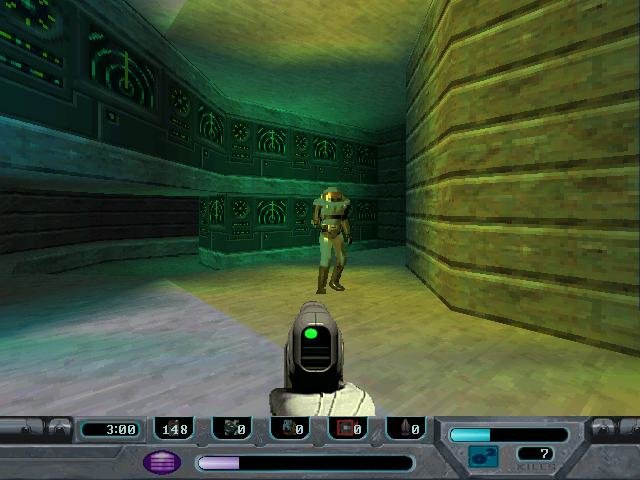