Real War, despite its name, is not an accurate war game. Instead, it’s another run of the mill strategy game trying to squeeze into the most saturated market in the industry. Real War’s lack of realism doesn’t just come in the form of smallish details that only grognard wargamers would notice. We’re talking about silly stuff like armor being obstructed by little white fences, infantry not being able to enter loose formations of trees, and supply trucks taking three hits from a tank before exploding. Tank shells travel at such slow speeds that it’s possible to dodge them while in mid air.

So it isn’t a war game, which isn’t necessarily a bad thing. The game stacks up a bit better as a standard real-time strategy game that happens to use modern day units. The most innovative aspect is the ability to coordinate your attacks via simple hotkey commands. You can issue simultaneous attacks, a feature that allows you to order your units to wait until all of them are in position before firing. Concentrated attack commands tell your units to concentrate all fire on one unit at a time. Finally, queued attack commands allow you to attack units in a particular orderâ€”for example, you can issue a command to knock out an artillery unit and then begin work on the infantry. Using these advanced attack commands well is key to succeeding in the tougher campaign missions. Each of the two campaigns contains 12 missionsâ€”one for the United States and one for the generic terrorist organization known as the ILA (Independent Liberation Army). These terrorists have an army just as powerful as the USA. Some missions may take you a few minutes to complete while others can take a couple of hours. Thankfully, you can save mid-mission if you need to take a break. Mission design is both hit and miss. Some of the scenarios are entertaining, but it’s highly annoying to have to scour an entire map to find the last enemy unit.

There are many units in the game, each filling a specific role. The game plays like any other real-time game in that every unit is countered by another unit, and there are only a few in the game that are ultra powerful. Each scenario also puts a cap on how many units of a certain type you may recruit. So “tank rushing” is a bit more difficult here than in other real-time games. Each faction has similar units with a few exceptions: the ILA has suicide terrorists, and the Americans have SEAL teams that can swim and perform other special tasks.

There is also a streamlined supply system. You simply build supply depots and never need to baby-sit them, since the delivery of supplies (items used to build units and structures) happens automatically. Resource gathering in a game such as this would make no sense at all and this system works very well. Unfortunately, Real War stumbles on the same branch that trips up most average real-time gamesâ€”the artificial intelligence and pathfinding. Units get lost while issuing simple move commands around an obstacle, enemy planes attempt to land while airstrips are under attack, and units sometimes simply sit idly by while being pummeled. Attacking AI is also rudimentary; the computer eschews tactics; instead it simply sends units in small lemming-like waves until its resources are depleted. It’s all bland, basic stuff. 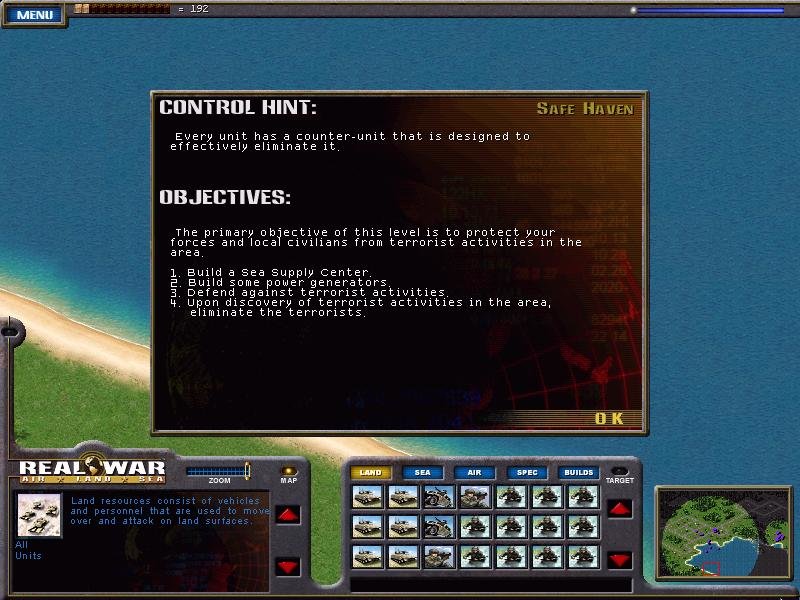