The gloves are off.

NHL 2000 is one frustrating hockey game. It looks great, sounds great, and has a healthy feature set. The super goalie problem from previous years is gone, which in turn provides great looking goals that reward players that work for their shots. But it has such lackluster artificial intelligence that it ruins what is otherwise a fun arcade hockey experience. 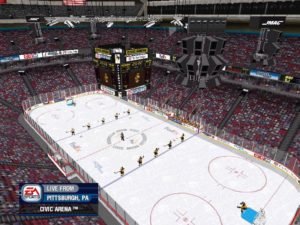 If it were not for that glaring problem, the game would be a joy to play. The biggest gripe from NHL ’99 was its lack of a good scoring model. The vast majority of goals were scored on rebounds and deflections and it made the game very frustrating and nothing at all like hockey. EA Sports has rectified this problem and now goals are scored on a wide variety of shots. Slapshots, wristers, backhands, defections, one-timersâ€”all of these methods work if used properly; an arcade game should always reward smart play and NHL 2000 does this surprisingly well all things considered.

Of course the graphics, a staple in every EA Sports game, are great. And EA Sports has upped the ante by allowing gamers to import their very own picture into the game. You can take a snapshot, convert it into any picture format, and create a player with a face that resembles your very own mug. It’s pretty darn creepy but if you want to spend the time doing it, it’s a real kick to see yourself skating around crosschecking NHL stars.

Taking a page from Madden 2000, NHL 2000 allows some degree of user customization. This is done via the “boost bars”. If you feel that the skating is too fast you can lower the “player boost”. (As a side note, it is strongly recommended that you disable speed burst as it completely ruins the game. Thankfully, EA Sports added the ability to turn this off.) If you feel that the goalies are too good (or too easy to score on) you can lower or raise the goalie boost accordingly. Sounds like a dream game, doesn’t it? Well, no, it’s not. While the game has certainly made strides in several key areas, there are still problems with the game that hurt it as a simulation and as an arcade representation of the sport of hockey. The biggest problem rests with the artificial intelligence of the program. On offense, defense and on powerplays, the game simply fails to deliver. The offensive AI will, at times, show flashes of brilliance, but for the most part it is ineffective even on the “all star” level of difficulty. While the AI with the puck isn’t great, the defensive and powerplay AI is just plain bad.

The AI problem doesn’t boost the series forward all that much, but EA still manages to deliver some of the better hockey games with NHL 2000.