The first Outpost was infamously released before it was done, and was lambasted as a result. The sequel, unsurprisingly, was meant to fix some of the issues present in the first game. There are no promised features missing. It is solid, stable, complete, polished, and occasionally amusing. I say ‘occasionally’ because, while the game does work, it commits one mistake that no form of entertainment is allowed to make – it’s just not that fun. Outpost 2 is a blend of several genres, including SimCity-style base building, C&C action and Master of Orion expansionism. Focusing most on colony management, Outpost 2 resembles SimCity the most as far as gameplay. You have to balance the needs of the colonists with the available resources; in effect, using power, ore, research, and labor in the combination that brings in more colonists. Progress is tracked through various reports. Natural disasters will occasionally hinder your efforts, particularly on the higher difficulty levels.

You’ll also have to research technological advances and fight the occasional battle, but building the structures to protect and house families is the key to everything. Many of the scenarios are like puzzles in which you have to cobble together a functional colony before a certain time limit runs out. In some of the scenarios, there is only one successful route to victory, so you’ll have to replay it several times before you succeed. For many players, this will mean frustrating brick walls as early as the third mission. Luckily, there are more open-ended scenarios available and a great variety of maps available for multiplayer games.

But what makes SimCity entertaining is missing from Outpost 2. Whereas the bare terrain in SimCity grows into a colorful and lively urban sprawl, Outpost 2’s barren landscapes sprout a few generic-looking buildings haphazardly organized. All of the buildings look alike, which is to say they all look dull. The biggest problem is that nothing looks alive. You wouldn’t know anyone lived here except for a single monochrome report detailing how many children, workers, and scientists you have. All the people are shut indoors never to show their faces. It’s SimCity without the charming bustle, set in a dreary colony limited to a couple hundred unseen folks.

Although there is some action thrown in, it comes up short since the emphasis is on colony micromanagement. There are a limited number of fighting units, created by mounting one of a half dozen available weapons on a guard tower or chassis. Unlike Warcraft, there is no maintenance limit on the number of units that can be built, so tank rushes will tend to decide battles rather than clever tactical combos. On the lower difficulty levels, combat is almost an afterthought, even in the later scenarios. But in multiplayer games, or games on harder difficulty levels, you can’t spend the necessary time with combat if you want efficient growth and balanced development. And unlike Warcraft or C&C, the units in Outpost 2 move at turtle paces. Outpost 2’s strongest feature is its tech tree, an extensive branch of research advances. These advances develop your buildings and vehicles nicely, as well as opening various options for power, mining, and disaster safeguards. As with Master of Orion, each new advance alters the game slightly. Too bad you’ll have a hard time figuring out which tech does what with all of the scientific jargon thrown everywhere. In all, Outpost 2 is a slow, mundane and pretty dreary experience. It fixes some of the annoying issues from the first game, making it playable. But one has to ask… should we care? 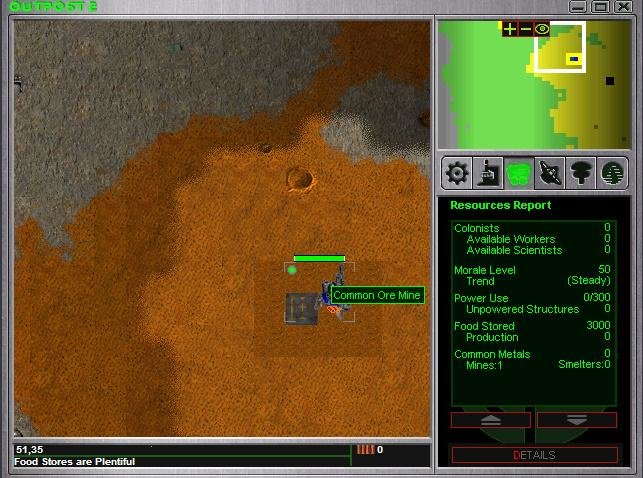 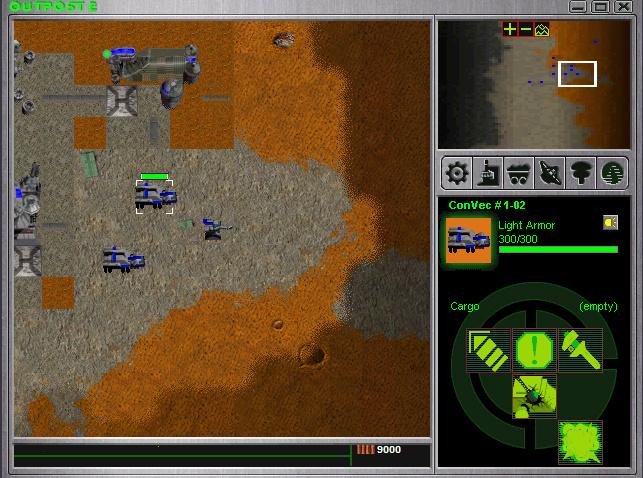