The one true Diablo II annihilator? Gas Powered Games was tented in May of 1998 by ringmaster Chris Taylor, whose career is well known by lovers of real-time strategy games. Taylor started his career in the video games business some 25 years ago at Distinctive Software, where the successful Hardball 2 helped to boost him into the limelight at a tender age. He served as the designer and project lead for Electronic Arts’ original Triple Play Baseball and eventually hooked up with Ron Gilbert and Cavedog Studios, where he created the game for which he is best known, the wildly successful Total Annihilation and its follow-up expansion pack.

After working on The Core Contingency, Taylor was fortunate enough to found his own company, something that he had wanted to do since his entry into the industry, and he and other 22 people started a most ambitious would-be Diablo killer soon after – Dungeon Siege.

Coming from an RTS mentality, you can’t but help notice how Taylor’s Dungeon Siege isn’t your typical action role-player. It fact it seems preposterously simple at first, lacking several hallowed design conventions – experience points, character levels, customizable stats, hell it doesn’t even have orcs for heaven’s sake! But rather than skimming the genre to its bare irrelevance, DS takes a completely new swing by adding a party dynamic infused with some clever RTS design and a good deal of freedom centered around character building. You encounter the occasional super-monster.

The story is your typical ‘ancient evil returns from yonder, hellbent on destroying the world’ affair in what could be the most run-of-the-mill fantasy universe ever imagined. While there’s a considerable backstory to tackle and the quests themselves are well infused in the game world, this isn’t a very deep or thought-provoking narrative by any stretch, nor is it really trying to be. Instead the game is designed primarily around action and variety, with Taylor having thought carefully on what constitutes ‘fun’ in an ARPG.

As in other games of its pedigree, most of the fun is centered around finding stuff and buffing up characters via the indiscriminate bashing of evil. But instead of fidgeting with statistics, you build up character proficiencies by using weapons divided into four major categories, be it melee (swords, axes, knives, etc), ranged (anything with a bowstring), natural magic (a great combination of defensive and offensive spells) and combat magic (burn everything to the ground!). Thus combat is the primary driver behind character building, and it’s so elegantly simplified that even your grandma can jump right in and play.

Along your journey you’ll meet several other recruitable characters with which to form a party, creating a genuinely fun dynamic. You have a choice of hiring this or that character, or spend more gold on buying powerful items to get that winning edge, or even buy a pack mule to hoard more stuff on dungeon crawls (which you can sell later on – the stuff, not the mule). You can develop individual combat strategies via the AI slider that lets you dictate how characters behave in a fight, whether they chase after foes, stay in the background as a supporting spellcaster, form a defensive firing line or jump in swords drawn. The enemy AI is mostly cannon fodder, but the party AI is so great that, once properly calibrated to your playing style, you can simply click on an enemy and watch the ensuing chaos. Both the 3D engine and on-screen interface are equally great, and with the exception of a few camera quirks encountered when navigating narrow areas, you’ll almost never feel the 3D perspective getting in the way. You can move around screen elements quite freely. And of course, you can reconfigure the mouse and keyboard to your liking. You can access all character inventories simultaneously and transfer items between them. Potions are combinable, and you can take a swig of one without finishing off the whole bottle.

The characters’ inventories are not only a whole lot larger than those you’re used to, they arrange items so that they fit automatically, and gold takes up no inventory slots. No more “Let’s see, if I move that sword to the left, I can fit those boots here….” Why has this not been the standard?

Likewise, buying and selling stuff is considerably more user-friendly. You might not be paying attention when buying an item you don’t really want, and most vendors in other RPGs offer merely a fraction of the item’s real worth. In Dungeon Siege shopkeepers have a very reasonable return policy, with items degrading in value the more you use them – re-sell them at once and you get a full refund. Yay!

Little clever design tidbits like this are all over the place, and are too numerous to count. Dungeon Siege’s only shortcoming is its generally repetitive nature – while great in short spurts, it quickly becomes evident that the game’s main gimmick consists of throwing ever larger hoards of monsters your way. This is typical of all ARPG games, so one could hardly blame Dungeon Siege for giving people what they want – lotsa creatures to smite, stuff to hoard and goodies to buy. In this regard it’s a real winner. 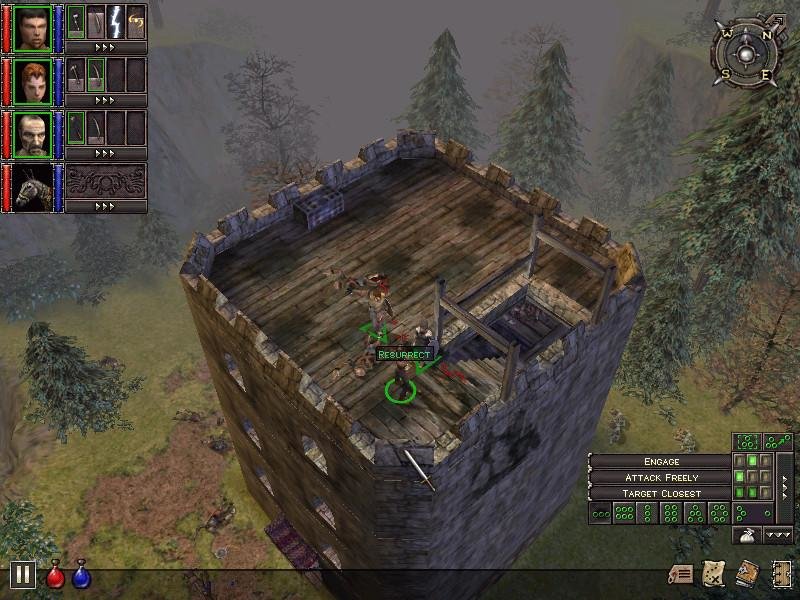 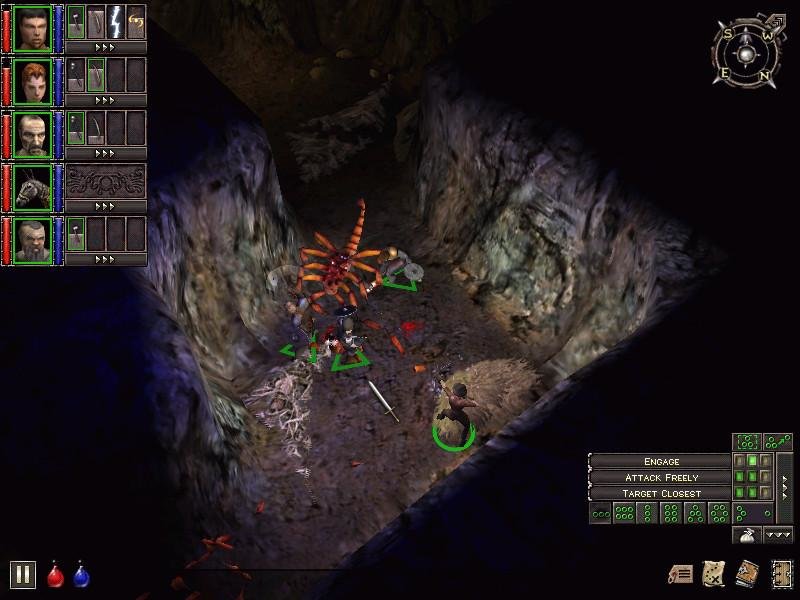