Rival Realms is an obscure Warcraft II clone that was put together by Romanian developer Activ Pub and published by Digital Integration, a UK-based company that specialized in flight simulation games throughout the 1980’s and 90’s. Rival Realms itself is your generic tolkienesque fantasy RTS depicting an epic war between Humans, Orcs and Elves, the Orcs, in this case, having been renamed ‘Greenskins’. Be that as it may, this game has an all too familiar Warcraft feel to it, but tries to compensate by infusing gameplay with an RPG element. Every unit gains experience by fighting enemies and can have their combat stats increased by equipping magical artifacts found in the game. All units, from your most valiant hero to your modest archer, have four item slots at their disposal for equipping items or potions. This system is fundamentally flawed for several obvious reasons, leading to an abhorrent amount of inventory micromanagement and pointless item shuffling between troops. Even if it were better executed, you’d have to ask how sensible an idea it is to hand inventory slots to every lowly, disposable peon.

The game’s RTS mechanics are a bit more organized but still problematic. There are four resources available – gold, timber, food and experience. Peasants are used to harvest the first three while experience is gained by armies through combat. You’ll need gold and timber to build basic structures while some of the more advanced buildings require minimal combat experience before they can be built. Experience levels also earn you small sums of gold at regular thresholds. A Fire Master blasts his way through soft rock.

Every side has a rough equivalent of the same buildings and units, with some notable differences specific to each race. Elves, for instance, have the best archers while the Greenskin heavy cavalry make up the best close-combat units. Some of the more interesting units include spies, which turn invisible and can even pickpocket enemies of their inventory items. Elementalists, on the other hand, work as engineers and can plant bombs, change the landscape or lay traps. To my disappointment, the campaign is tediously uneventful. All of the missions feel pretty much the same, whether it be production-based or otherwise.

The AI is also pretty backward. Groups of units sent across vast distances will almost always get stuck along the way. I notice how units try to get to their destination by following a straight line and frequently stumble around if an obstacle is blocking their path. Monsters have a single-minded focus to kill whatever they see first and this can easily be used against them. You simply lure monsters out and have them chase one of your units while your archers steadily hack away at their health. A cheap tactic that works every time.

Visually, this game isn’t the least imposing. The graphics are simple but at least the interface is functional, although barely. The same can’t be said about the sound, which is downright horrible. There are few sound effects and the sparse commentary your units deliver repeat on and on. Sound effects aren’t localized to areas you’re viewing, so you can be exploring the other half of the world and still hear the incessant thwacks of your peasants as they chop away at wood or gold (the same sound is used). Needles to say, it gets very annoying.

Rival Realms desperately tries to stand out with a few nifty features and fails miserably. While it does have one or two cool ideas, nothing here is executed well enough to warrant your time. 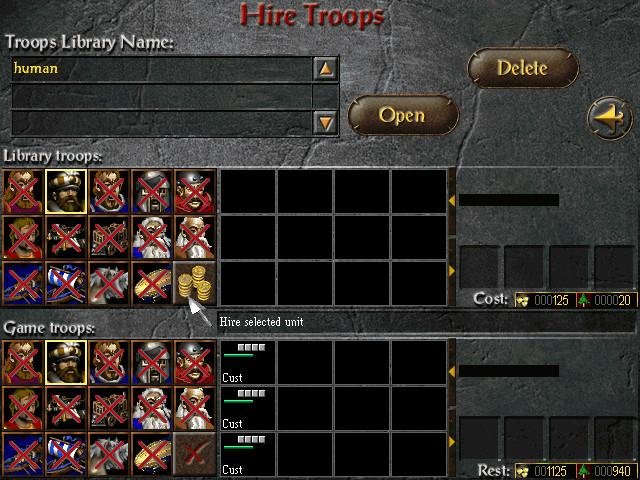