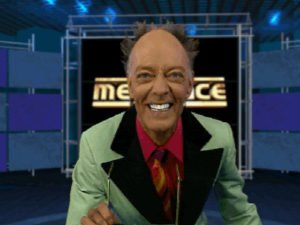 MegaRace sold a lot of copies. Its success can be attributed to Mindscape’s bundling skills, and to the fact it was an early CD-only game. MegaRace 2 is also a rail racing game, meaning the visuals (tracks) are all pre-rendered. The graphics, however, have been beefed up and the scope of the game expanded. Unfortunately, the actual gameplay hasnâ€™t improved; in fact, it seems to have taken a step backward. Where the original game gave us simple, no-fuss controls and rewarded (or jeered) us with mercifully brief clips of Lance Boyleâ€™s polyester schtick, MegaRace 2 suffers from the more-is-better attitude, specifically more of Lance Boyle.

In other words, there is a lot more Lance, and the gameplay doesnâ€™t get nearly the attention it deserves. These clips are simply too long, too annoying — and at times, too painfully cringy to watch. Lance mugs for the camera in excruciatingly long pauses, milking your nonexistent laughter for several seconds before hamming it up some more. In MegaRace, these sequences were a nice little part of the gameâ€™s personality, but in MegaRace 2, they come close to becoming the game. Even with a mouse or joystick, MegaRace 2 is a lot tougher to steer than the first game. Instead of providing the kind of precise analog control found in most arcade racers, allowing you to make large or small steering inputs, the designers apparently decided to make things artificially difficult by only letting you perform hard left or hard right turns — itâ€™s an all-or-nothing proposition, even with an analog joystick. As a result, youâ€™ll spend most of your time overcorrecting, bouncing from rail to rail, and doing your best to maintain control of your car.

The sense of speed created in the original game is gone as you toddle along these tracks (even as youâ€™re frantically fighting to stay between the rails); the only real challenge is keeping your car moving forward long enough to cross the finish line. And while the pre-rendered tracks do indeed measure up nicely against the competition, the crap controls and endless drivel from Boyle make this game more torture than fun.