Once again, Sega has ported one of its successful arcade games to the PC, and once again, it has failed to add more than minor enhancements. The game takes place on the Isle of Man, a small island in the Irish sea famous for the challenge and beauty of its racing courses. Where Manx TT falls short is the number of tracks. The only addition to the PC release over the arcade version is the inclusion of a reversed and mirrored version of each of the two original circuits. There is just not enough content here to keep you interested for more than a couple of hours.

The bikes, although a bit blocky around the tires, look decent, and the feeling of speed is conveyed fairly well. Control is another issue entirely. There are eight bikes to choose from with varying degrees of speed and handling. The bikes with less handling actually feel more realistic, but many of the turns are so sharp that itâ€™s nearly impossible to negotiate them. The bikes with better handling feel nothing like a motorcycle, allowing you to power-slide through turns. Regardless of which bike you choose, the controls fall short in some departments, whether gamepad or keyboard.

In order to progress through the challenge mode, you must finish in at least third place. On the final track, if you finish in first place, you will be rewarded with moving on to the Superbike race. The Superbike stage gives you three new bikes to choose from and increased competition from the other drivers. After thirty or so frustrating attempts to finish the final race in the allotted time, I must admit defeat and confess that I wasnâ€™t able to experience the Superbike mode. Itâ€™s a shame, too, because I was really looking forward to racing the same tracks yet again. 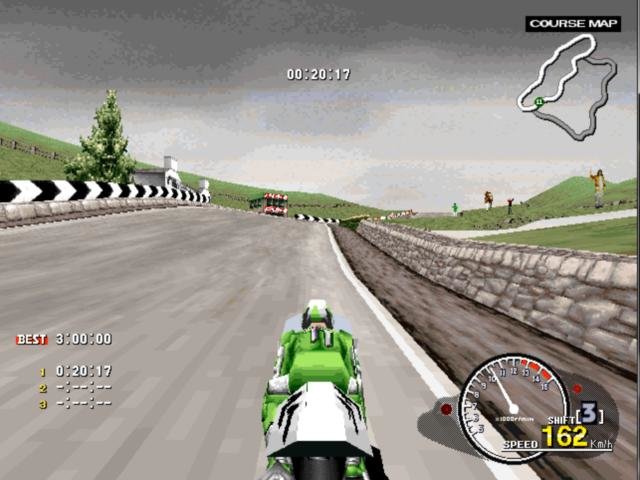