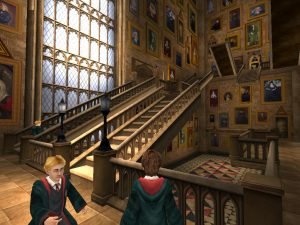 Just as the movie version of Harry Potter and the Prisoner of Azkaban shows a marked improvement over previous representations of J.K. Rowlingâ€™s impossibly popular series, so does the digital version. The game does a superb job of capturing the look and feel of the Harry Potter universe. The PC version is different than its console cousins, with better graphics (powered by the Unreal engine) and controls that actually make it feel like a typical PC third-person action/adventure, albeit one that is incredibly easy.

Though it generally follows the storyline from the book and movie, itâ€™s more of a companion piece. The narrative and levels touch on major events but generally donâ€™t dwell on the details. The game is mostly linear, though between ‘missions’ you do get some freedom to run around Hogwarts, where you can find secret areas, collect trading cards, buy trading cards or mingle with the other wizards. The saving point system has kept true to its console origins, though there are enough spread around to make it less annoying. Whether on a mission or free roaming, a save point will always be but a few minutes away.

The design throughout is superb, a model of how to drag the player through the game without making it feel like, well, like itâ€™s dragging players through the game. You get to control Harry, Hermione, and Ron on certain levels, while others have all three running around casting spells and getting into trouble together. This is a first for the game series, though controlling each character is more of cosmetic touch. None of them have any abilities that make them truly unique. Aside from using the standard WASD for movement, most of the action is controlled with the mouse; much like a classic adventure game, the cursor is context-sensitive. While you eliminate guesswork on, say, what spell you might want to cast or which object you manipulate to open up a secret area, it lets the action zip along without players getting bogged down with too many options. In other words, it’s essentially identical to the rest of the series, which is to say it’s identically simple to grasp.

Thatâ€™s generally a bad thing, but in this case it works. Thereâ€™s a lot of stuff to do and look at, and as an exploration game, Azkaban delivers. In addition to running around Hogwarts looking for hidden areas, you get to ride Buckbeak, and you can run around as a rabbit or a small dragon. In all cases, youâ€™re rewarded with all sorts of goodies, including cards that feature various wizards and monsters, Bertie Bottâ€™s beans, cauldron cakes, and pumpkin pasties. Some levels are classroom lessons, and upon completing them youâ€™re rewarded with bonus levels where you get to collect more stuff on a timer. These brief levels provide so much simple gratification that itâ€™s too bad there are only three of them.

There are some minor bugs along the way, such as dialogue playing even you’ve paused the game, but usually the game runs without any problems. It won’t offer any sort of a challenge to hardened adventure players, but for people who are new to these sort of games, it’s a fun little trip.