Where many have gone before.

Tachyon: the Fringe is altogether a good effort for a company that’s better known for creating semi-arcade flight sims. This game combines space dog-fighting action reminiscent of the X-Wing and Freespace series with just enough choice to give it a sense of freedom. A substantial number of missions, many of them in two entertaining campaigns, describe a sinister yet satirical corporate-dominated space faring future. The game’s quirky voice acting augments the mood, as do its solid though not overwhelming 3D graphics, which are alternately dark and cartoonish. While the game’s AI proves to be neither aggressive nor capable in a dogfight (Tachyon is probably more appropriate for the space sim novice) players of every skill level should enjoy its atmosphere. As stated before, Tachyon takes place in the 26th century and, predictably, big corporations dominate life in our solar system. Beyond our immediate home there are six other regions of space, collectively known as the Fringe. While the Sol government exercises authority over the solar system, they rarely ventures into the Fringe, leaving it to be fought over by pirates, corporations, breakaway colonies and a variety of other groups. Tachyon focuses on the conflict between a collection of independent colonies (the Bora) and the Galactic Spanning Corporation (Galspan), a company attempting to assert absolute dominance.

The protagonist of Tachyon is Jake Logan, a starfighter pilot ably voice-acted by Bruce Campbell. Campbell provides a significant amount of glib dialogue before, during, and after missions, and his mid-dogfight quips never get stale. Logan starts the game as a contract pilot for a corporation in the Earth solar system, but then he gets framed for a horrific crime and exiled to the Fringe to scrape together a living as a freelancer. When the conflict between Galspan and the Bora heats up, he is offered the opportunity to join one of them, opening up either a twenty-one mission Bora campaign or a nineteen-mission Galspan campaign. While working your way through the campaigns, there are also twenty-one independent missions that Logan can fly regardless of who his employer is.

Space sim plots inevitably depend on some form of faster than light travelâ€”in Tachyon that travel is based on tachyon gates. The gates connect the six Fringe regions, and each of them has a number of sub-regions strung together by tachyon gates. In any given mission you will be required to fly through a number of the regions toward your final objective, often meeting pirates, and other obstacles along the way. Tachyon does a good job in making you feel like you’re a free-willed freelancer. You have to look for missions on the job boards located at the starbases in the six fringe regions. Sometimes you’ll find a variety of campaign missions and independent missions that you can play in whatever order you choose at a given starbase; other times you’ll need to move on to look for work elsewhere. You are also able to trade in goods you occasionally find laying about the mission areas, and, if you are at the New Vegas Starbase in the Frontier region, you can even play some slots or head out to the gladiatorial starfighter arena.

At every base you can check the multimedia news reports, which will sometimes feature your exploits. These are nice touches, though Tachyon’s immersive feel would be even more enhanced if there were even more mini-games available at the various starbases, such as investment opportunities or more gambling. Although Logan occasionally evinces some political sympathies, he leaves little doubt that his prime motivation is money. With money you can purchase better ships, upgrade your weaponry, and hire wingmen. Galspan and the Bora each offer a distinctive menu of ships and weapons, and as the campaign advances, more powerful and more expensive offerings become available.

Both sides offer a variety of beam weapons, while Galspan offers a selection of guided missiles and the Bora various unguided rockets. As missions are completed, a variety of advanced ship’s systems become available for purchase as well, such as advanced radar, targeting systems, and laser, shield, and afterburner energy reserves. Increasingly more competent – and more eccentric – wingmen become available for hire as well. Good wingmen are generally an asset, but don’t rely on their erratic AI a whole lot. There is a large variety of weaponry and systems available, some more appropriate for a given mission than others. Logan eventually makes enough money to own more than one ship, and will outfit each ship according the what sort of mission he’ll be flying. Combat is double edged, sometimes satisfying while at other times just frustrating. You’ll come up against scores of fighters at any given time, making some defense missions seem a bit overkill (having a wingman tag along doesn’t always nullify this) and you’ll likely have to retry a fair share of assignments. Further complicating things is a narrow field of view.

Tachyon does an entertaining job of telling a storyâ€”two stories in fact, depending on which campaign you pickâ€”and fans of Bruce Campbell’s many tongue-in-cheek T.V. and cinema roles will have no trouble envisioning a science fiction story crafted around his typical wise-cracking accidental hero persona. In the cockpit, Tachyon will be instantly familiar to anyone who has played space sims such as Freespace or X-Wing. If you are a hard-core sim nut, you might find Tachyon a bit easy… but you probably won’t find it boring. 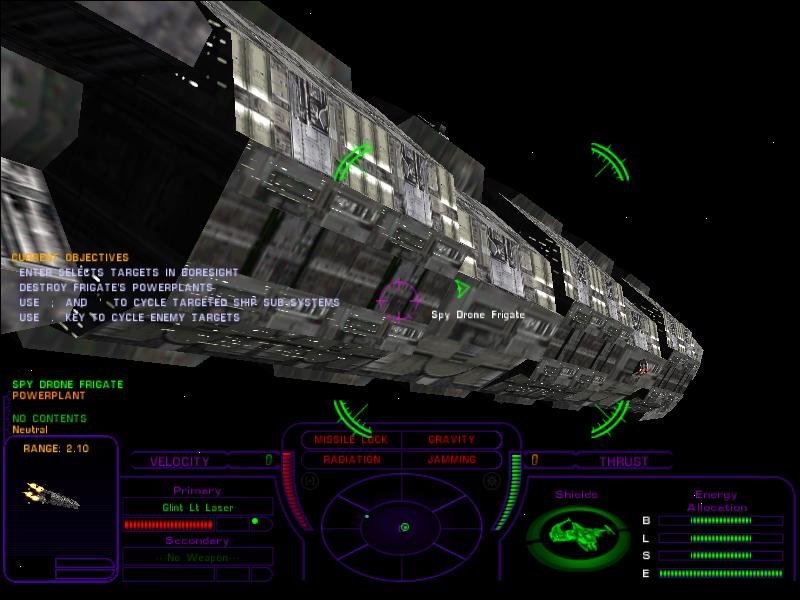