Chronomaster may lack the multimedia flash of other exploration-heavy adventures, but it more than compensates with a well-paced storyline, a huge assortment of characters, and a sprawling variety of puzzles. Based on the works of Roger Zelazny and set in the distant future, the world of Chronomaster is ripe with possibilities for an adventure. You play Rene Korda, a retired scientist largely responsible for the development of pocket universes.

When the game opens, you receive an alarming call from the regional representative of the Old Terran Government: Someone has placed two universes, the militaristic Urbs and desert-world of Aurans, into stasis, freezing them in time. Your mission is to reactivate the two universes and track down the person who put them into stasis; your only leads are the names of two pocket-universe architects associated with the areas in question.

Each pocket universe you encounter is basically a game unto itself – you canâ€™t carry an object from one universe to another. In addition to all the traditional graphic-adventure commands such as Look, Talk, Walk, Use, Push/Pull, Open/Close, and Take, Korda also has a “Universal Tool” at his disposal. The UT can always be used as a hammer or screwdriver, but it has a third capability that changes from universe to universe. Korda also has a PDA that can interface with some of the objects he finds, and on some planets he must learn and cast spells. With so many ways to approach each obstacle, itâ€™s no wonder that some of the puzzles can get confusing. After youâ€™ve felt that deep-down-good feeling that comes from piecing together a tangled web of clues to solve a problem, though, you probably won’t even care f0r the horrid voice acting. What will bother you, though, are a few annoying features of Chronomaster’s design. For one thing, it takes far too long to navigate the game world, with no shortcuts to speed things up. And a few of the solutions to the puzzles are downright vague and will probably stop the game in its tracks, even if you’re sharp enough to spot a clue here and there. 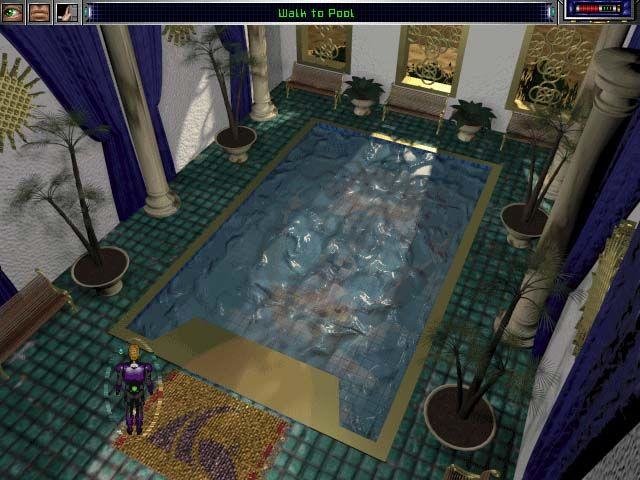