Not as creative as its source material, but a great add-on nonetheless. Opposing Force lets you to experiencing the Half-Life story through the perspective of one of the grunts sent in to contain the alien invasion at Black Mesa, the ultra-secret research facility from the original game. You wear the boots of former U.S. Marine Adrian Shephard, now transferred to a special detachment known as the Hazardous Environment Combat Unit (HECU), and find yourself en-route to an undisclosed location via Osprey transport choppers when things suddenly go to hell. The opening segment is every bit as creepy as that of Half-Life.

Opposing Force flows naturally alongside the main storyline, allowing you to catch subtle glimpses of events and locations from the first game. Even though you’ll revisit a few places from the original, it doesn’t feel in the least like recycled material, but rather gives off eerie feelings of deja-vu. It really does feel like you’re venturing into new undiscovered parts of Black Mesa during the alien invasion. And if you remember the original game, you’ll know that the marines are hopelessly outmanned and outgunned. This luckless marine got his head crabbed.

Not ten minutes into the game and the now-infamous order is received via radio: “Forget about Freeman.” The alien threat is too much, and all marines are ordered to pull out. But in a brilliant scripted scene, Shephard just misses the last chopper heading out, and suddenly the player’s M.O. is simply survival. In addition to most of the aliens we’re familiar with, Opposing Force introduces about ten new enemies. The lumbering insect-like Voltigore is one of them, meant to be an obvious fill-in for the Garg. Others are a lot faster, and one breed uses organic weapons which you can use yourself.

Several conventional and alien weapons have been included – the usable Barnacle (which also works as a makeshift grappling hook) is creatively implemented. A greater portion is made up of real-life military hardware such as heavy machineguns, sniper rifles, army knives and whatnot, all of which logically fit into the scenario. And in the end it does make more sense for the military guy to handle the rocket launcher, and not the egg-head scientist in a power suit.

Besides the new levels, monsters and various weapons, this expansion pack’s final notable attraction is the new squad AI. You’ll often find stranded soldiers here and there who can be ordered to follow and provide assistance, be it a Medic restoring some of your hitpoints, an Engineer for cutting through obstacles or a Heavy Machinegunner to just mow down enemies mercilessly. At best they offer alternate targets for the aliens (and the new Black Ops grunts), but fighting alongside them is actually good fun, even if the team-based aspect is used only in short spurts (you’ll chance upon a few survivors here and there, fight as a team for awhile, encounter a difficult obstacle and will have to leave them behind). On a few cool occasions they work as a puzzle element. One example is when you find a medic hanging around a locked door, urging you to find a way to open it. You enter a nearby warehouse, clear it and find a wounded engineer whom you have to heal using the medic. Then you lead the engineer to the locked door so he can force it open.  Simple little puzzles like this go a step beyond the expected switch-pulling and button mashing obstacles, of which there are plenty as well. But overall you have a stronger emphasis on clever puzzles than you had with the original.

Bad endings have been the downfall of a hundred good games, and unfortunately the same can be said here to some extent. The showdown with the final boss creature is little more than a disappointing exercise in puzzle-solving, highlighting a general fault with the expansion – while Gearbox did create good action and a few clever puzzles, it could never rise to the same level of awe-inspiring suspense encountered in the original. While such conundrums serve a great purpose in the middle of the game, an action title should have bookends of fiery missile-launching death.

But taken together, Opposing Force is a great continuation of Half-Life. It’s an enjoyable trip that’s just a bit short of the creative juices that its source material enjoyed, but one that provides enough action to warrant your time. 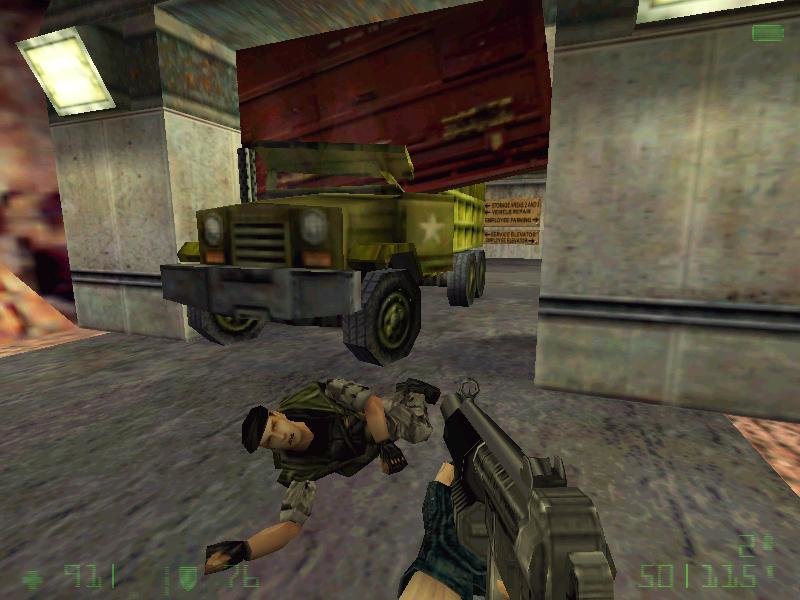