Galactic Civilizations was just the right game to yank everyone from their Master of Orion 3 cynicism. It appeared out of nowhere, but managed to impress and entertain traditional 4x space sim enthusiasts. The expansion pack brings little in the way of actual changes to the core gameplay, but instead supplements it with new stuff. 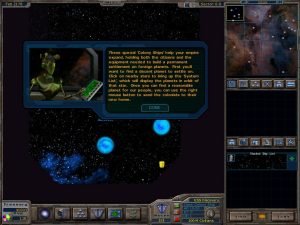 You get the requisite new units such as the paladin, wraith, vamp and sovereign spacecraft, as well as two new races – the Drath and the Korx. The clean game mechanics of Galactic Civilization have always worked well best on smaller, more focused situations that really drew on the game’s deeper strategic choices. The 10-mission campaign focuses a lot on these aspects. And for the truly die hard fan, there’s even a map editor that allows you to create linked campaign. In short, this truly is a loyal fan’s expansion disc.