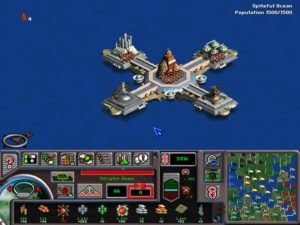 The original Deadlock was an intriguing mixture of Master of Orion’s whimsical sci-fi theme, with Imperialism’s resource management and Civilization’s population juggling, all set in the focused environment of a single planet. It had its own style and charm, as well as the addicting quality that defines many classics. Enter Deadlock II to address some of the original’s shortcomings. Unfortunately, it’s one of those “one step forward, one step back” dances, with a weak AI ruining what could have been a solid strategy game.

One of the first things veteran Deadlock players will notice is that this sequel isn’t very different from the original. Hardly surprising, since the developers at Cyberlore Studios cut their teeth doing expansion packs for Warcraft II and Heroes of Might & Magic II. But Cyberlore shows a disappointing lack of innovation with Deadlock II; not only are the gameplay mechanics almost an exact duplication, but many of the same problems with the first game are still present.

Most conspicuous is the clunky interface. Although it is different, it’s not much better, and in some respects it’s even worse. The elegant slider bars are gone, replaced with the equivalent of a “drag and drop” spreadsheet. Colony management is still a tedious territory-by-territory affair, made somewhat easier by a new “colony assistant” screen. Some important information (morale, taxation, idle colonists) is at least one screen too deep, while other information isn’t even available (growth rate, unit support costs) or is poorly represented (enemy territories and armies, food consumption). The excellent tech tree is an exception to the clunkiness: it’s all laid out on one screen, allowing you to easily plan out and review your long-term research. On the whole, it seems that Cyberlore was trying to fix the interface; they just weren’t very successful. 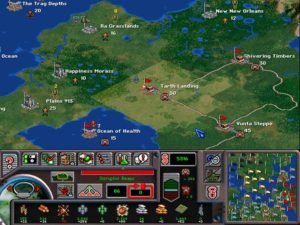 They were more successful with the game’s combat and economy. The strict stacking limits that made the original Deadlock so worthy of its name have been removed. With the new air and sea units, there are more tactical considerations, so the non-interactive battles are more exciting. The resource management is also very well done, although no different from Deadlock. It requires some serious micromanagement to develop and maintain a thriving colony, made all the more challenging by the game’s interface. But it’s so logical that developing your colony is one of those uniquely satisfying computer game experiences.

But all of that fun is ruined once you realize how poor the game’s AI turns out to be. The computer opponents will almost never attack, they won’t expand into vacant developed colonies, their colonies are poorly built and managed, and they make random diplomatic demands. I set up a game with all six opponents at the highest skill level and was not once attacked, even in retaliation as I started swallowing up my neighbors. The only challenge against the computer is taking the time to mow down the defenses it might accidentally build.

In the end, Deadlock II is more expansion pack than sequel. There just aren’t that many upgrades here to warrant marketing this game as a continuation of the original, and the parts that have been improved upon get eclipsed by that old curse that seems to plague strategy games – simplistic artificial intelligence.