The hardcore contingent often criticizes EA Sports for packaging more glitter than substance in its sports games, but even the harshest critics consider the FIFA series a benchmark of excellence in sports gaming. FIFA 99 is the latest in the line and, while there are nits to pick here and there, it is another example of what a good sports game should be. 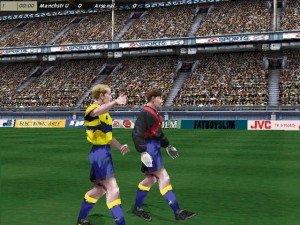 The series has never looked this cinematic.

You might as well use your cut and paste function when describing the sights and sounds of any EA Sports game: they’re great, the standard to which others are compared. The commentary is relevant, accurate and timely. The crowd chants, cheers great plays and goals and proclaims its anger at the referee. The player animations look better than ever, textures are more detailed and weather effects look believable. One area of controversy and debate is the graphic portrayal of the stadiums, which have been made more generic-looking due to time constraints. Some stadium interiors look nothing like the displayed picture during selection.

A more significant limitation is the restriction to 640×480 resolution, regardless of the video card used (Glide and Direct3D acceleration are supported). As well done as the graphics are, there is no satisfactory view that allows the player to see a wide enough segment of the field to prevent the need for blind passing. The only wide screen option is a somewhat top-down view that loses much of the graphic excellence of FIFA 99; a higher resolution view that shows more of the field is needed.

Once on the field, the game plays well. FIFA 99 offers league play in twelve leagues, the ability to create a custom league, championships and a European “Dream League.” The opponent artificial intelligence in the FIFA series has always been among the best in the business, with improvements made in each incarnation. World Cup 98 introduced excellent goalie AI; FIFA 99 bumps up the positioning and overall play, but nothing really revolutionary. While the view system often forces you to make blind passes, the computer play is good enough that your teammates are usually where you expect them to be. A seemingly minor improvement is in how the players control the ball near the sidelines. In most soccer games, a player rushing to a ball near the line will invariably kick it out of bounds upon contact. FIFA 99 allows players to take control of the ball without forcing it out, a touch that seems minor but which has a significant effect upon game play.

Whether playing Arsenal through a season in the English league or France in an International Cup, the game provides a good level of excitement and replayability, and should be worth your time.