You get exactly what you might expect with Fantasy General – the Panzer General engine decked out in full Tolkienesque units and terrain. I know there are probably some die-hard grognards out there who look upon this sort of thing as heresy, but itâ€™s their loss. The Warlords series, which is basically the same kind of game, encountered considerable resistance when it first appeared, until wargamers realized how much fun it was. 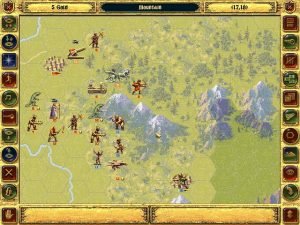 The Shadowlord has conquered the world of Aer, and the player, as a liberator, must raise an army, complete with powerful heroes and spell-casters, to overthrow this evil empire by winning control of Aerâ€™s five continents. As was the case in Panzer General, your starting units become core forces which can, with upgrades in equipment and magical powers, become elite legions. As you win strategic locations from the Shadowlordâ€™s hosts, youâ€™ll uncover caches of treasure, which can be allocated toward research and development.

Winning control of the first continent is not difficult: you have the advantage of surprise, and the forces of evil are disorganized. Thereafter, youâ€™ll encounter increasingly powerful and numerous enemy forces. Each continent has differing terrain and objectives, so youâ€™ll need to adapt your tactics accordingly.

Occasionally, mighty heroes will appear and join your ranks, as will bodies of local militia, grateful to be liberated (and initially good for little but cannon-fodder); and eventually youâ€™ll discover an engineer whoâ€™ll give you the ability to develop mechanized units. SSIâ€™s designers have come up with a marvelous array of unit types, including some Jules Verne-inspired flying devices and siege engines that can hurl plague germs into enemy cities.

Though it doesnâ€™t have network or modem support for multiple players, thereâ€™s a customized battle generator called the Arena, where you can create your own character, choose the number of turns, build whatever kind of exotic army takes your fancy, and play by E-mail against human opponents. Call it “wargaming lite” if you want to; in truth, thatâ€™s probably right on the money. Fantasy General doesnâ€™t have the strategic depth of Warlords II, nor does it come close to the sheer cutthroat exuberance of the Warcraft games; but even so, itâ€™s easy to learn and great fun to play.