With the bill collectors about to knock down the door, Tex Murphy takes on a seemingly easy pawn-shop robbery case to make a quick buck. It seemed like a simple job, but your success in solving it leads to another assignment, one with more frightening implications. So begins Access Software’s once revolutionary CD-ROM adventure, Under A Killing Moon.

After Myst, Killing Moon is a breath of fresh air. There are actual characters played by real-life actors (often complete with cringy performances), cut over plainly rendered 3D scenes with a tightly-knit row of buttons and screens making up the interface. You couldn’t get any more retro than this if you’d tried on CD-ROM, but for a ’94 game it’s surprisingly playable. You have a list of people and things to investigate in this somewhat static adventure. A handy list helps you out, as each time you learn something new, it gets added to your list. And if this new knowledge comes with an adress, that’s noted in your handy travel map that’s used to get around Killing Moon’s noire town. You can also find items on your journey, although the game sometimes has a habit on throwing you on red herrings by adding items of no real use (as far as I could tell). But ff you want an old school CD-ROM adventure that’s both fun to watch in its own cheesy way, and also nice to play, then look no further. 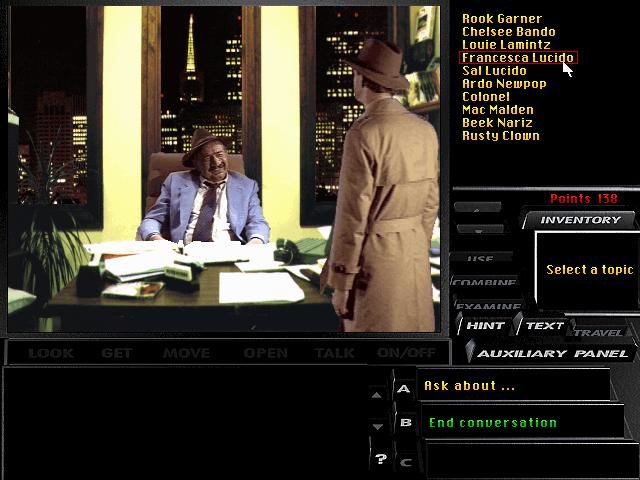