There is much in Outlaws that will remind you of LucasArtsâ€™ previous 3D shooter, Dark Forces. The level designs of Outlaws will constantly evoke memories of equivalent levels in that game. However, one look at the cut scenes that set up the story will eliminate all your memories of Dark Forces. While the story, about an ex-Marshall looking for the killers of his wife and kidnappers of his child, is derivative in the extreme (which was probably the point), it is so professionally produced, from the voice-acting to the animation, that any criticisms become irrelevant.

Gamers used to loading up a game and trying to finish it quickly on the lowest skill level will be quick to judge Outlaws as Doom with a Wild West spin. Play the game on the highest skill level and that comparison will be put to rest. Once you allow the player to be killed after one or two shots, and give them limited ammunition, you suddenly have an all-new gaming experience. The weapons selections are fairly predictable, but having to press a key to load your weapon is a wonderful addition. Thereâ€™s nothing worse then breaking into a room full of people and realizing you forgot to load your gun.

You’ll be fighting through standard Wild West-themed locations in Outlaw. Locales ranging from typical Western towns, with saloons, banks and stables you can enter, to canyons, an old fort or a speeding steam train. True to other games using the old Build engine, Outlaws relies heavily on action sequences mixed in with key hunts. The visual flair of these levels aren’t quite on par with Quake or even Duke 3D, but they do get the job done. The game uses sprites and not polygonal models, and they get extremely ugly up close. The in-between level cutscenes, which use the animation style typical to LucasArts games, is very well produced and acted. 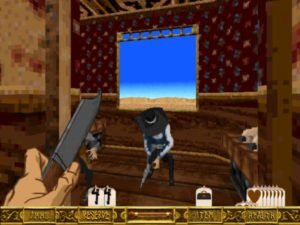 It’s unfortunate that they didnâ€™t take the same care in creating enemy AI. The bad guys still donâ€™t react to things happening near them, allowing you to snipe someone from long-distance, then snipe the guy standing next to him because heâ€™s somehow failed to notice that his friend is dead. Outlaws is actually noted for being more innovative as a multiplayer game. Unlike other 3D shooters, there is no â€œrocket launcherâ€ weapon that throws the game out of balance. All of these things combine to increase the tension and keep Outlaws from becoming yet another Duke clone.