Driver is a tease. Initially, it overwhelms you with its premise and atmosphere, strutting its superb vehicle dynamics. It’s an interactive version of the best of the gritty 70s and 80s car chase movies. But over time its flaws emerge, ranging from the relatively minor (it cheeses out on its premise, putting you as someone infiltrating a crime syndicate as opposed to actually being a criminal) to the major (terrible and repetitive missions, insane difficulty levels, bugs).

At times the game will surprise you with its sleek 3D look and visual appeal, mocking you with its untapped potential (it could have easily been a GTA killer, if only for the 3D engine and driving physics). It’s realistic enough to give you that feeling of driving two tons of corpulent 1970s American iron. It also delivers a bunch of entertaining gameplay variants, from Pursuit (catch and ram ’em!) to Getaway (flee as fast as you can!).

On The Road To Nowhere The visuals are very bright and flashy.

These don’t really give you much in the way of substance, however, so you’re stuck with the main “Undercover” mode of play to deliver any depth. It features branching missions set up by poorly rendered cut scenes featuring a virtual catalog of racial stereotypes (at least they’re equal opportunity offenders). The missions would fare a lot better if you weren’t forced to play most of them over and over again. They vary wildly in quality and difficulty, regardless whether they’re at the beginning or near the very end of the game. In fact, don’t be too surprised if you’re completely unable to complete the very first mission, which requires you to do a series of difficult driving stunts.

Time limits are the main source of difficulty in the game, and they’re as annoying as always. On a few rare occasions they make sense (you need to be someplace to pick up guys who are robbing a store, though you’d think they would have phoned ahead and planned it out a little better), but for the most part they’re completely artificial.

This sense of artifice carries over to your main protagonists, the police. Their cars have superhuman handling and appear out of nowhere. Within seconds of tripping a siren, you’ll find roadblocks ahead. They’re also a bigger public nuisance than any crime syndicate, recklessly plowing through the streets and incoming traffic (much like in Midtown Madness).

On the plus side, Driver does a fabulous job of creating interesting city environments. While none of the real-world towns modeled are accurate, they’re full of twists and turns that make for a lot of driving fun, and the bright colors really give them a positive vibe. But the flaws are numerous, although a great many could be attributed to the game’s console origins. At times Driver is quite entertaining, and you may find yourself wanting to load it up for a minute to do some cruising and get in a few chases. Ultimately, though, all of its shortcomings do a pretty good job of overwhelming its strengths. 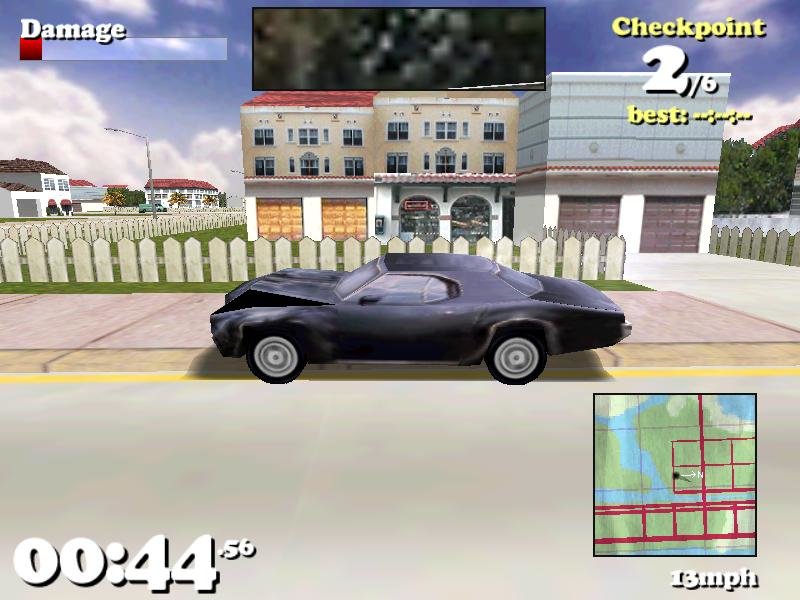