Basically, Dragon Dice is a high fantasy strategy game that uses dice as armies. Each die has icons representing missile, melee, magic or shield points, and one declares the type of attack, rolls his army, and then counts off the appropriate icons. The defending army is rolled, and shield icons are counted to offset the offensive icons. Casualties are taken in the form of losing some of your dice. That, in a nutshell, is what the game is all about. 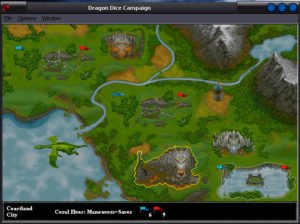 Of course there are many more details, the most important of which is that your collection of dice can be different from game to game. At its core, Interplay’s Dragon Dice models the physical game well. Unfortunately, the underlying game is obfuscated by having dice morph into caricatures; by battle scenes which replay inevitable results. And of course the game can’t replicate the real visceral feel of dice. Interplay would have gotten better results if it had kept the game simpler and the interface more polished.

Dragon Dice is not a complex game, though it’s a bit hard to explain. There are a few video tutorials that do a better job of it. Once you’ve watched them and started playing the game, you’ll begin to pick up on the rules on a more conscious level. But if the designers had been more concerned with giving you solid information, and less concerned with goofy graphic effects, this benefit would’ve been even stronger.

There are options to play a standard game using customizable battle (dice) sets, to play tournaments wherein you have the equivalent of x Dragon Dice starter sets to build your battleset out of, and campaign modes where you play a linked series of games using pre-set dice. Plus, there’s multiplayer over IPX or modem. None of the game is inherently terrible, nor is it extraordinarily interesting to play. It’s a mild strategy game through and through.