Based on a series of role-playing games and novels, Emperor of the Fading Suns blends all the classic ingredients of Civilization-style strategy – exploration, research, fleet-building, invasions, and diplomacy with opponents, yet has a distinct atmosphere all its own. The mood of historical context is well-sustained, the details are fine-grained and meticulously consistent, and there is admirable depth to the gameplay. And unlike some other genre classics, this game offers a satisfying model of planetary combat, complete with an amazing variety of units.

Research, of course, yields advanced weaponry and technology, but EOFS adds a very intriguing twist: some of the most useful research subjects are banned by the Church. You can go ahead and develop them anyway, but there is a fairly good chance that your heretical activities will be spotted by the Inquisition. Diplomatic interaction is unusually varied and plausible, not the usual cut-and-dried dialogues found in many games, although this aspect of Emperor of the Fading Suns is still limited by the AI.

One problem with Emperor of the Fading Suns, however, is the lackluster interface. Unless you engage the “Universal Warehouse” option, youâ€™ll spend much of your time micro-managing cargo pods, and manipulating big stacks of units can be confusing. This means you will have to play and learn as you go, a process that will take hours. Few people have this level of dedication, however. It might not be as enjoyable because of its complexity and incomplete manual, but Emperor of the Fading Suns is definitely an ambitious strategy game. 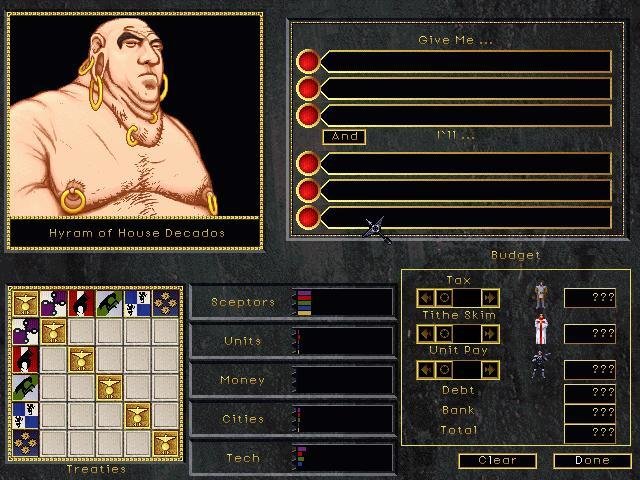