Sierra grafts strategy and role-playing together. Birthright is broken up into three distinct parts – an empire-building strategy game, real-time tactical battles, and a first-person role-playing game. The strategy game is by far the most complete. As ruler of your small country you have to earn “regency points” by forming relations with or subjugating your neighbors. This can be done in a variety of ways: mustering troops, playing diplomatic games, peddling influence among guilds, or ordering assassinations. Once you acquire enough regency points you can make a bid for the Iron Throne and face the Gorgon himself.

First impressions of the game are strong, especially with the handy tutorials and help file and several available gaming modes – a full empire-building campaign, single battles or simple dungeon crawls, and of course a range of assorted tutorials. The grand strategy portion covers all aspects, as you can send a few hardy adventurers on a quest.

This is played out in a first person 3D environment. The interface is rather clunky, with the biggest problem being that your party travels in single file. This means the wizard at the back of the line can’t use his spells on an enemy directly in front, since all he can see is another party member standing in front of him. There are other issues here, too, but the truth is, the adventure module is best avoided for now (and avoiding it does not seriously detract from the overall game experience).

The real-time battle game in Birthright uses a grid system, as well as a 3D battlefield (you can use this to control units as well as, but the grid is much easier to manage). Each unit represents a formation of typical AD&D soldiers (elvish archers, dwarvish infantry, goblins…that sort of thing). As a module that you drop into from the empire building game, the battle game is quite good. You get results quickly (though the AI can auto-resolve battles if you wish) but there’s enough decision making that your input matters. Then there’s the best part of Birthright – the empire building game. Your two main resources are gold and regency points. Accumulate the former through taxation, trade or tribute. The later comes from the innate ruling ability of your regent or as a byproduct of the vastness of your empire (whichever is less). Use these resources to build an economic empire and buy your way to alliances (for once, you can honestly win a game through diplomacy) or just conquer through combat. Barter trade holdings for magic sources. Demand tribute, build roads, forge ley lines (magic conduits) or kill leaders.

All in all, Birthright is a tad flawed – the prospect of merging an addictive first-person dungeon crawler with a tactical combat and empire building game seemed just too good to be true, and it certainly is here. Although Sierra hit some aspects right and missed out on others, overall this might have been too ambitious an undertaking, even for them, to fully realize. 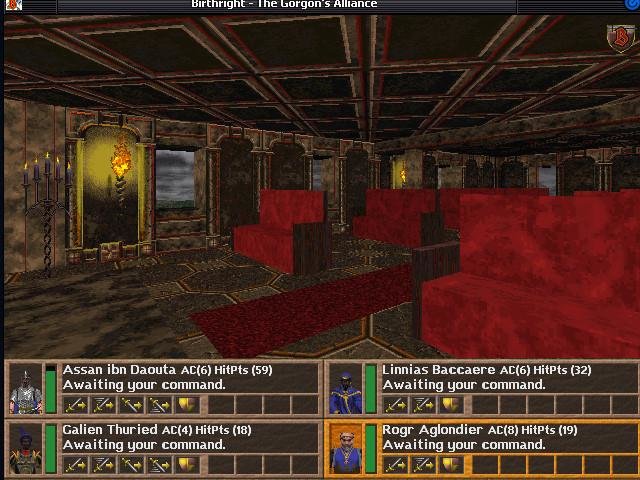