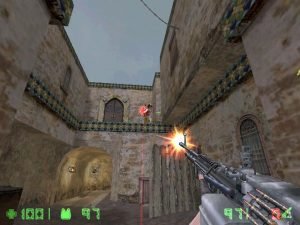 Counter-Strike Condition Zero was initially pieced together by Ritual Entertainment, who focused on offering an action-oriented singleplayer game that had little in common with the original CS. This concept was eventually scrapped and redone, and what had been finished up to that point grafted together and released under the “Deleted Scenes” label. This is a standalone product – you won’t need any previous version of Counter Strike installed. And while the game is definitely in need of refinements, it more or less plays like a finished product.

The game, as it stands, is the most linear tactical shooter you’ll ever find. The singleplayer campaign follows various Counter-Terrorist squads around the globe in a series of non-related and heavily scripted missions. But while providing different backtrops, the driving gameplay behind all of these missions is essentially identical – kill terrorists. Unlike genuine tactical shooters, however, Deleted Scenes doesn’t involve outwitting the enemy through Rainbow Six-style planning and teamwork, but with tapping that trigger finger as fast as possible, sometimes with the help of another AI-controlled bot, but usually alone. Damage has been reduced to arcade values, playing more like the original Half-Life sans good AI. 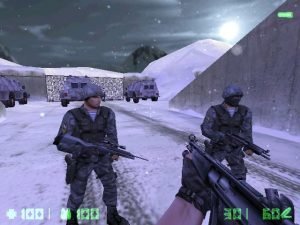 And that’s the crucial flaw with Deleted Scenes, which, while bearing the Counter-Strike brand, plays nothing like that game, and is arguably less amusing than the bot-powered first iteration. You can’t do any of the things that made Counter-Strike fun, even though they could have been implemented here. Why not let you earn money and buy better guns over the course of a mission, for instance? You could start out with the scrawny USP pistol, then gradually purchase deadlier hardware as you kill enemies. Although contrived, this would at least lend some tactical depth to the game and make it somewhat more interesting.

Instead, you’re handed a stock primary and are forced to stick with it for the duration of an entire mission. You’ll occasionally find extra rifles (unlike in other CS games, you can carry multiple primary weapons), but will usually slaughter the hordes of terros with an auto primary and semi-auto secondary combination. This, together with the game’s predictable level design, makes the combat feel very tedious. Some cosmetic inventory items are thrown in on the side to give the game a tactical veneer, but they act more as puzzle items – eg: you encounter a padlocked door, so you must find a blowtorch hidden somewhere nearby to proceed.

With mostly basic gameplay, simple AI and horribly repetitive action, there’s not that much inside Deleted Scenes to make it worthwhile. It’s definitely not a Counter-Strike game, despite the broad selection of real-life weapons. That being said, the straightforward action isn’t inherently terrible – it’s really nothing better or worse than the avalanche of free mods floating around for the original Half-Life. If you enjoy that sort of stuff, then more power to you. But for a high tier company producing this stuff, it’s just not good enough.