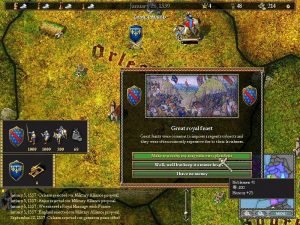 Stuck in the mud with nowhere to go.

Two Thrones is a sort-of sequel to Crown of the North, a light strategy game released by Paradox. Instead of medieval Scandinavia, Two Thrones throws you into the more familiar turf of the Hundred Yearsâ€™ War and the Wars of the Roses. You take control of any of the major players in the life or death struggle between England and France, or you can command the Yorkists or Lancastrians in a quest for the crown.

Itâ€™s only a sort of sequel, because itâ€™s mostly a remake of the earlier game. Though the setting has changed, little else has. The graphics are identical, and many of the historical concepts are rooted in Scandinavia (for example, you can â€œHold a Tingâ€ even though â€œparliamentâ€ would be more appropriate). Even the victory message is a holdover; it congratulates the player for taking steps toward the â€œKalmar Union.â€

Local anachronisms aside, Two Thrones ultimately suffers the same problems as Crown of the North did. Though you are encouraged to balance the interests of domestic factions, random events largely do this for you. The AI is neither aggressive nor intelligent, and prefers to build useless militia, if it builds at all, even on the hardest difficulty level.

Battles are all or nothing affairs, so a killer stack can wipe the board of all opposition and end the war in 15 years instead of 100. Diplomats can be sent endlessly, meaning that an enemy can become an ally literally overnight. Itâ€™s a little better in multiplayer, but not much. Replacement armies take too long to muster, so early victories have an exaggerated effect. Even as a tutorial game for children or strategy-phobic friends, Two Thrones fails to deliver. Victory is assured once a couple of major battles go in your favor, so there is no real reason for anyone to keep playing to the end.