If you’ve played the very first Command & Conquer (1995) then Tiberian Sun should greet you with nostalgic appeal. Hell, just booting up the installation program will give you flashbacks, as you’ll stand witnessing a mock DOS-era setup program that morphs into the modern product, as if by magic – ‘Welcome back, commander!’ And that’s largely what Tiberian Sun is – a meld between what is old and what is new, with a little bit of interspersed magic here and there. It’s neither groundbreaking nor very innovative, but pure and explosive fun from the guys who practically invented the RTS genre. 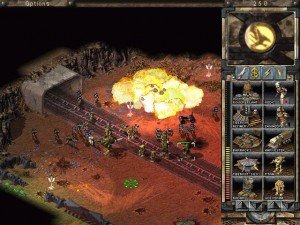 The levels have that grim post-apocalyptic vibe, but the game overall is a colorful experience.

The plot is advanced via full-motion videos and old fashioned mission scripting. While the plot itself seems ripped out of a sci-fi B-movie, it’s nonetheless worth following. The cast alone is pretty impressive – James Earl Jones (now 83) plays General Solomon, Michael Biehn (1984’s Terminator) stars as Commander McNeal and Joseph Kucan returns as Kane. The story follows a post-apocalyptic future where the world has been turned into a desolate wasteland as two factions – the Global Defense Initiative and Brotherhood of Nod – battle for global supremacy.

On the battlefield, Tiberian Sun continues to employ a similar array of units and structures. However, it has abandoned the awkward, nearly top-down approach for an isometric viewpoint that permits you to fully enjoy the rich dynamic scenery of a planet ravaged by tiberium and tiberium-powered war machines. Eerie lighting effects combine the glow of tiberium fields with explosions, meteor showers, and ion storms.

The environment is more pliable than in the past: battlefield explosions leave craters and scars, and some cliffs can be exploded to reveal paths from low to high ground. Bridges are easily destroyed, both intentionally and accidentally, and units unlucky enough to be traversing a bridge when it collapses fall to their death. This gives bridges considerable strategic importance, especially early in the game when aerial and underground units capable of alternate routes are not yet readily available.

Tiberium, the toxic alien growth that reduced much of North America into an eerie wasteland, makes up the backbone of the game economy. Both sides harvest this deadly substance with special vehicles, which then gets transported into a refinery before getting converted into military units. It’s invaluable to your war effort, but you wouldn’t want to be anywhere near the stuff. The substance is so nasty that infantry will die off if they hang around Tiberium fields for too long, and even come back as hideously deformed mutants as a result of Tiberium poisoning. Similarly mutated plants and animals form the new ecosystem, and they come coupled with such events as ion storms and meteor showers. 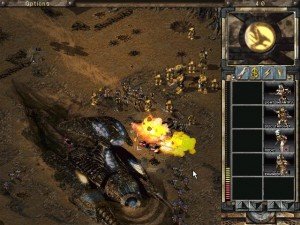 Here you protect a derelict ship from incoming forces, just one of several defense missions.

The balancing is fair for the most part – GDI is the efficient war machine while NOD is better suited at defense and subterfuge, although the differences between these two sides aren’t as fundamentally contrasting as in StarCraft’s Humans vs Zerg vs Protoss. Both NOD and GDI share an assemblage of buildings and unit types, each more or less effective against the other. While the stamina and firepower of the new GDI mechs give them the early-in-the-game edge over more fragile NOD cycles and buggys, NOD’s artillery, self-entrenching tanks, and cloaking tanks quickly make up the deficit. NOD’s cyborg infantry are the toughest infantry units.

NOD’s real stealth advantage comes from its burrowing subterranean units, especially its Armored Personnel Carrier. This unit can travel underground, virtually undetectable, and surface in any unpaved area. While it can carry any pedestrian unit, it is perhaps best employed in sneaking a group of engineers into the center of an enemy base. 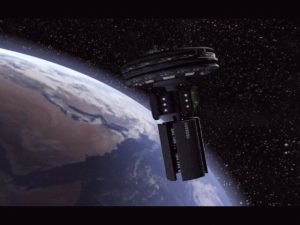 A staple of the Westwood RTS games, the engineer is capable of capturing enemy buildings and thus provides an insidious and powerful member of the arsenal for both GDI and NOD. Multiplayer games can be cut short by slipping an engineer into an opponent’s camp and capturing his construction yard, thereby ending his ability to build structures, or capturing his barracks and using it as a spawning ground for more engineers to quickly capture the rest of his base. This tactic is equally effective in single-player mode.

While Tiberian Sun is an altogether fun action-strategy hybrid, it’s neither revolutionary, nor technically flawless. A few interface and mission design issues will plague your fun from time to time, but the B-movie story, sound and feel of the game will undeniably shine through its flaws if you give it some time.