Carmageddon was a very amusing action racing game, and to describe it as ultra-violent would not do it enough justice. But how can you make it better? More sadistic? Extra juicy? By adding a bunch of new stuff obviously, which is exactly what you get with the Windows-compatible Splat Pack expansion set, a standalone release. Twenty new tracks are spread across eight different levels, plus fifteen new cars get mixed in with the old.

The cold-blooded gore in this game is exaggerated to the point of farce and beyond. You thought 400 pedestrians per map wasn’t enough to paint the town red? Try doubling that number. Perhaps the puny racing cars you competed against didn’t provide enough of a challenge? Try sharing the road with a monster truck then. Add to that a catchy techno soundtrack and you have the perfect excuse to go through the singleplayer. Well, sort of. Carma’s Splat Pack does add a lot of fun stuff, but it also brings with it the limitations of the original game. First there’s no real racing to be had here – just checkpoint chasing against the timer, which you fill up by running over peds and wrecking the competition. The second way of winning is to kill every pedestrian on the map (almost impossible), and the final way is by wasting every other car. Destroying enemy cars is the easiest, especially since they’re not too shy of attacking you either.

The system by which the game rewards you with extra cars is still garbage. You get them randomly by destroying them, but it’s so rare that you’ll be racing through most of the game with the boring stock car – again. It seems almost cruel to add so many cool new cars into the mix and not let you drive them. 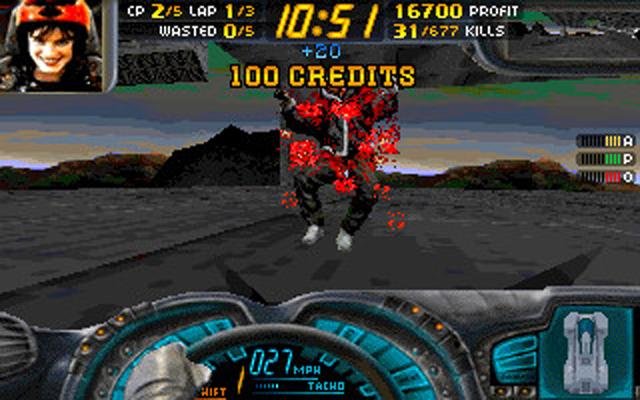