It trips and burns in a smoldering pile of stupid.

To be honest, Demolition Racer isn’t a terrible game; rather, it tries to do very little and succeeds admirably, delivering a mundane gaming experience that virtually defines brain-dead mediocrity. It’s a by-the-numbers racer with a twist â€” you get points for damaging opposing cars during a race, and those points are multiplied by your finish. On many occasions you can win the race but drop in the standings and not advance. While all of this is fine – driving around crashing into cars is, as always, an incredibly entertaining exercise – most of the game’s features are executed without any flair, or appreciable talent. The developer is Pitbull Syndicate, whose members previously worked at Reflections, the developer responsible for Destruction Derby (obviously an inspiration), as well as the more recent Driver. When comparing this game to either of those far-superior products, you have to wonder what happened to the superior gameplay and believable physics that was once their hallmark.

Pitbull Syndicate also created two rather unfortunate entries in the Test Drive series, and as with those two games, the tracks in Demolition Racer are one long corridor after another. While there appear to be areas where you can leave the track (by either ground or air), you’ll find magical invisible barriers that stop you. It’s always an annoying gameplay contrivance.

You’ll often find yourself hitting those barriers while flying around in mid-air because the “physics” in the game have no real-life basis, or even a consistent basis within the game itself. Gravity is seemingly random (or perhaps locational) – you may stay on the ground when going over jumps at high speed, but in other areas the smallest bump will send you flying and twisting in the air. Worse yet, the game plays excessively fast, even with the included speed level set to ‘very slow’ in the options screen, and the breakneck pace at which you race will quickly wear you down unless you’re on a prolonged coffee binge.

The game also has spotty collision detection and curious scoring. You’ll often drive right through other cars, and worse yet you’ll ram cars and not get any points for your hard work. While the game delivers a fairly generous 12 tracks and multiple racing and destruction derby variations (most of which aren’t particularly memorable), there is no multiplayer… which is probably a blessing – who’d actually want to play this against other people? 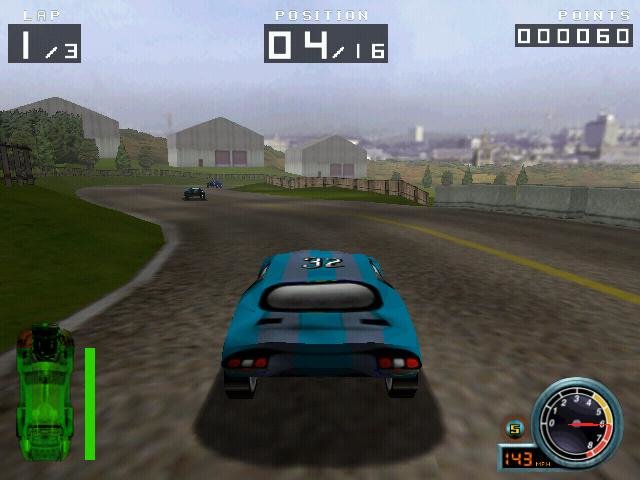