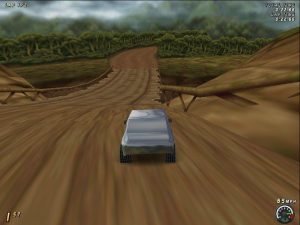 Boss Rally from Southpeak Interactive is a glaring case of missing the point about everything that makes an arcade racer fun. Boss Rally offers 16 cars to choose from on six rally-style courses. You may race solo against up to 19 computer-controlled opponents or engage in competition against up to three other humans â€” an awfully restrictive number that is quite a bit smaller than the eight erroneously listed on the game box. It is also possible to race in Championship mode and advance through a series of competitions that include Time Attack and Quick Race.

Given that this is an arcade offering, there are not too many tweak settings one can adjust. But you may choose one of three tire types and three shock setups as well as set the steering responsiveness to deal with different weather (sun, rain, fog, snow and night) and racing conditions. What is not completely clear to me is why tires and shocks are deemed to be the most important areas where adjustment is possible rather than the many other components of a car that affect performance.

The game has terrible production values as far as sound, visuals and AI. The environments look like washed-out bitmaps thrown together. The cars and effects all sound terrible, and the AI is blissfully unaware of your presence on the track, being too busy to follow a fixed path. The options of cars and tracks pale to the sheer low quality presentation of Boss Rally, making it utterly unappealing.