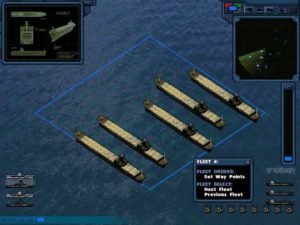 No amount of multimedia gloss could hope to sustain a straight port of plain old Battleship for long, so to keep Hasbro’s game kicking, it has coupled the old classic with new play modes, options, and network games. Battleship provides several different modes that escalate in difficulty, from convoy scenarios to total war. In the provided practice mode, you can play a simple game of classic trial-and-error Battleship, a seek-and-destroy mission against a small fleet, a sample attack on aircraft and aircraft carriers, or a mission to acquaint you with the construction of island bases.

With added scenarios such as The Oil Wars and Island Hop, youâ€™ll manage several fleets while competing with other computer-controlled armadas. To emerge victorious, youâ€™ll have to juggle alert levels, defenses, and even air strikes – a far cry from the board game. For your annihilative pleasure, each ship is equipped with medium, large, and ultra large guns, plus a handful of cruise missiles. And, of course, classic Battleship strategies naturally come into play when the time comes to haphazardly lob shells into uncharted enemy waters. Unfortunately, Battleship finds it necessary to beat you over the head with heaping gobs of full-motion video. For some strange reason (probably because it looked neat), the video plays “underneath” the gaming field as you play. This provides plenty of distraction during crucial moments — and while the quality of the animation is outstanding (especially the pyrotechnics), youâ€™ll find yourself wishing for an option to just make the video go away. While it’s still more of a board game than a proper naval combat simulator like Harpoon, Battleship does a fantastic job of breathing new life into this classic.