Unlike a lot of unlicensed shareware programs and poor quality knock-offs that roughly mimic the basic gameplay of Scrabble, this game wasnâ€™t created by novice programmers or slapped together for a fast buck. Scrabble is, for all intents and purposes, an extremely faithful (and possibly superior) version of the original board game. Not only do you get multiple levels of challenging computer players to compete with, but there are also network options for playing with real people..

Though Scrabble is a relatively simple crossword game to understand and play, there is in-game assistance for any of the rules. Thereâ€™s even a chart that displays the value and number of each letter-tile available in the game. The program also contains its own dictionary to help you quickly resolve any challenges. If your opponent claims thereâ€™s no such word as “XU,” a few mouse clicks will show itâ€™s a Vietnamese monetary unit.

When playing in singleplayer mode, that dictionary will come in handy; you can choose from as many as three computer opponents, each with its own skill level. These range from Novice, Intermediate, Advanced, Expert, and Champion. Even on the lowest difficulty level, the computer won’t be shy of using five-letter words, but mostly limits itself to four-letter ones. On the highest difficulty level, the computer is virtually unbeatable.

The dictionary used is the Official Scrabble Players Dictionary, and itâ€™s actually a very lenient one. Not only will the computer use words that even the most well-read gamer may not know, it also allows little, almost non-words like EN (thatâ€™s the pronunciation of the letter N), or RE (as in DO-RE-MI-FA-SO-LA-TI-DO). This lets the computer squeeze in some pretty incredible combinations — which you can take advantage of yourself, once youâ€™ve got the hang of it. Fortunately, a Definitions feature lets you look up look up the meaning of any word that the computer throws at you. Itâ€™s especially handy when you’re playing on Championship level; with all the new and unusual words youâ€™ll come across, the Definitions option can really boost your vocabulary. In all, this is about as faithful a virtual representation of Scrabble as you could ask for, and if you don’t have the board game (or can’t find a person to play with) then Hasbro’s PC version is more than adequate. 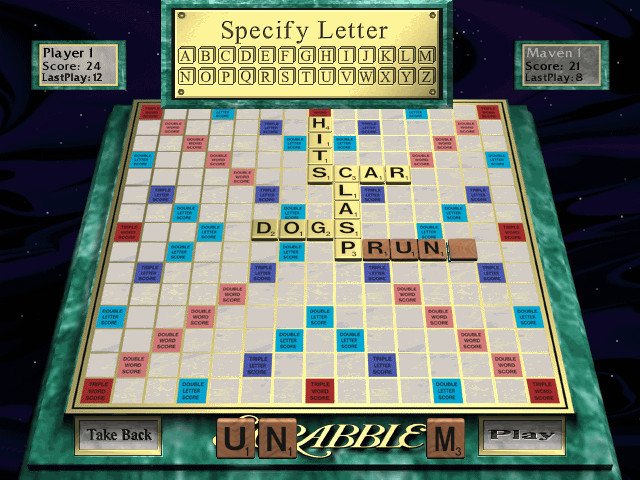