Imagine yourself on the deck of a U.S. Navy carrier off the shore of Iwo Jima. The guns of a nearby battleship pummel Japanese positions on the island. You’ve got a choice between piling into a Higgins boat with several squadmates and setting off for a beach assault, or climbing into a fighter plane and provide close air support on the island guarded by anti-aircraft weapons. Imagine all of the above manned by other live humans in a magnificent 64-player multiplayer online environment.

That’s just the tip of the iceberg that is Battlefield 1942. Its 16 maps cover an astonishing breadth and depth of WWII operations, including infantry pushes, tank charges, artillery bombarding, anti-aircraft guns, fighters, bombers, amphibious assault, naval warfare, and even submarines. There are 35 vehicles in all, plus 20 different weapons ranging from rifles, bazookas to stationary weapons like MG-42s and AA guns. All of these roles can be played in the game, most of them cooperatively in conjunction with teammates (i.e., a driver and a rooftop gunner for heavy tanks). 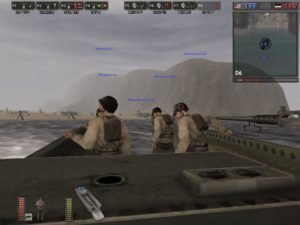 American, British, Russian, German, and Japanese forces are all modeled. Each map pits two forces against one another in a re-creation of a historic battle. The scenario designers took every conceivable opportunity to model elements of warfare that applied to the real setting — so, for example, tank maneuvers rule the El Alamein map, while beach assaults and aerial jousting feature heavily at Midway, and Stalingrad is nothing but a street-by-street urban meat grinder of hand-to-hand killing.

Five classes are available to pick from when you join in a battle. Scouts have sniper rifles, as well as field glasses with which they can “spot” targets for artillery further back. Assault troops get a very useful automatic rifle, and are the most effective in close combat. Anti-armor specialists hoist bazookas into battle, and make effective tank-killing infantry, though their reliance on a backup pistol makes them useless in infantry fights. Medics can patch up both themselves and wounded comrades, and engineers can repair vehicles and lay mines and explosive packs.

There are a few different multiplayer modes, but only one worth playing. While capture-the-flag, team deathmatch, and deathmatch (ugh!) are all available, Conquest is the only mode most people are playing. In these battles, the two opposing sides start off on opposite ends of the map, with unclaimed flags at the map’s key strategic points. Control of a flag adds points to your team’s running total, and you snip points from the enemy team with each tick of the clock that a flag is in your control. Control them all, right up to the enemy’s base, and you win a Major Victory. Although hard to fly, you can take to the skies with a number of fighter planes. Or bring them down using AA cannons. 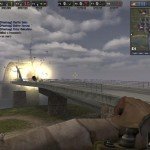 But don’t forget to rig the bridge with explosives before you get flanked. 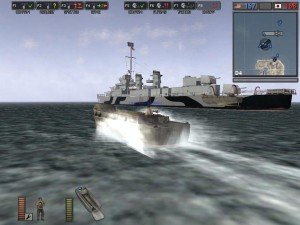 Several flaws make themselves felt. Noticeable and distracting audio bugs and a general lack of ‘bang’ to the weapons make the game sound flat. But perhaps the greatest downer here is the lack of a smart bot AI. Sure you can populate the map with up to 200 of them, but they show zero tactical awareness. They fire at other soldiers with Bazookas, hop into your tank and hop out seconds later, then hop back again. Most annoying is that they tend to hog the best vehicles – tanks, APCs and planes – and you can’t kick them out. Overall, the bots just don’t make the game fun.

But in its scope and fun BF 1942 has plenty of potential. Dive for cover as a fighter-bomber strafes your position, only to see the plane chopped up and brought spiraling to the ground by an APC-mounted machinegun. Watch two guys slug it out in a tank duel, and then knock out the winner with your Bazooka. Charge from your Higgins boat onto Omaha Beach and snipe the Nazis in their hilltop machinegun bunker.

In all, Battlefield 1942 is a large and fun online shooter. The bot AI is unfortunately not up to code with previous games of its kind (Unreal Tournament botmaches can blow BF out of the water), but the wicked fun of human vs human matches more than make up for it.