If it’s a war you’re looking for, you’ve found it. Gray Matter’s United Offensive has more of the same visceral appeal and fantastic design of the original Call of Duty (which you must have installed in order to play this expansion). Back are the same hectic battles between scores of soldiers and scripted mayhem around every corner, the same sense of camaraderie for your fellow AI mates and the same feeling that you’re a small cog driving a larger meat grinder called World War II.

You get lots of those engrossing cinematic moments driving the scripted missions from the perspective of three characters of various nationalities – American, British and Soviet – plus a ton of excellent level design keeping it all together. Even those pesky commando missions from the first game have returned in more action-packed overalls, and are actually a joy to play this time around. Before that you start as a US Ranger caught in the middle of a massive German invasion during the first days of the Battle of the Bulge, continuing on a midnight patrol, and then a daring assault on the occupied Belgian town of Foy ripped straight ouf of Band of Brothers. The RAF bombing run is by far the most spectacular mission in the British campaign.

The highlight of United Offensive’s singlepalyer campaigns is actually on the British side, which pits you in the boots of an RAF B-17 gunner during a day-time bombing raid a la Memphis Belle. The sense that you’re stuck in a floating heap of vulnerable metal is excellent! As you suffer through flak and aerial engagements with the Luftwaffe, the plane steadily disintegrates and engines fail, pieces fly off the frame, metals creak, high-altitude winds become deafening, and you see other planes get shot down and crash to the ground. It’s unlike anything you’ve experienced in, say, European Air War, as here you can walk around the plane and inspect the chaos up-close, putting out fires whilst shooting down swarms of enemy fighters.

Later portions of the British campaign are just as interesting, involving a midnight raid on a railway bridge and an SAS operation in Siciliy peppered with numerous rail shooting sequences, including a bike ride and manning a PT gunboat. But as was the case with the first game, it’s the Russian campaign that truly dazzles. You get herded into trucks taking you to the front lines at Kursk, where you’ll face down artillery, aerial harassment and dreaded German Elefant tank destroyers. Later assaults on Ponyri train station and into Kharkov paint a chaotic picture that were the later days of the Eastern Front. An unlucky RAF bomber gets hit. The flamethrower effects are pretty cool.

After you blast through the singleplayer game, which offers about four or five hours of gameplay, you’ll find an assortment of 11 new multiplayer maps. Base Assault, Capture the Flag and Domination modes are featured, and mixed with the usable vehicles give off a typical Battlefield 1942 feel. You can still play online via GameRanger!

Wrapping it up, United Offensive is a fantastic Call of Duty experience that mirrors how the later non-WW2 games of the series would evolve. The action-filled missions can lead to sensory overload when played in long stretches, but going at it in short bursts is the best way to go when tackling the singleplayer. All of the creative touches and fun action make COD UO one of those few expansions that actually surpass the original in both quality and creativity, if not sheer quantity. 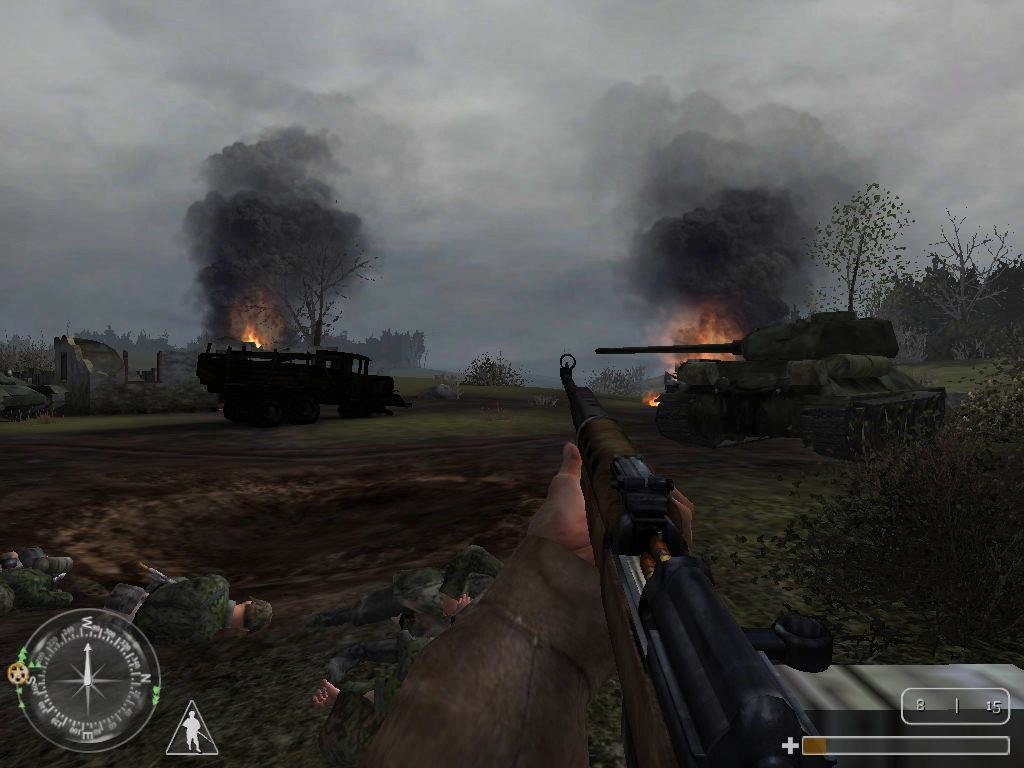