Leading the charge of the ubiquitous WW2 shooter.

Medal of Honor: Allied Assault is every bit the equal of Wolfenstein, but for the opposite reasons. Whereas Wolfenstein is closer to Kellyâ€™s Heroes (you steal the Nazisâ€™ gold and then you kill â€™em), MoH is closer to Saving Private Ryan (you simply survive Omaha, but never ‘win’). And while Wolfensteinâ€™s singleplay was a respectable prelude to its fragfests, MoH is an exceptional solo adventure first and foremost. You play the role of Lieutenant Michael Powell, an American Ranger officer who manages to switch between beach assaults, patrols, covert operations, sabotage and tank commander during the course of the singleplayer game. You begin in North Africa, with the task of taking out German artillery covering an invasion beach. In subsequent multipart missions, you hit the highlights of Nazi sub pens in Norway, Omaha Beach, the Norman Bocage, ruined villages, picturesque German towns, and secret factories and underground research centers.

Most of Allied Assault’s cinematic appeal originates from Saving Private Ryan, a brutal World War II movie that’s a must-see if you’re to tackle this game. Numerous scenes are ripped straight out of the movie, most notably the epic beach assault of Omaha, then continuing to a Norman town swarming with enemy snipers and a mission centered on defending a bridge from advancing German troops in France. The Spielberg influence is unsurprisingly strong, given that Dreamworks Interactive is the driving force behind the Medal of Honor series. Other scenes pay homage to Kelly’s Heroes and The Dirty Dozen, but these aren’t nearly as evident as Spielberg’s Ryan. You start the game with a night raid in Africa.

The missions themselves are well thought out and offer extraordinary variety, although they are linear and script-laden to the extreme. In North Africa, after storming a town, rescuing a prisoner, and making your escape, you man the machine gun in the back of a jeep, strafing up an airfield. In France, you’ll rescue a tank crew, capture a King Tiger tank, and then stroll through a village infested with Wermacht troops and Panzers. Some missions are straight up firefights, while others require a modicum of stealth. A few stealth missions slow the action down considerably, and one Ryan-esqe mission halfway which involves you advance through a bombed out town full of snipers.

Your mission objectives are varied, ranging from your basic ‘get from here to there’ tasking to stealing plans, blowing up guns, and freeing prisoners. The game keeps you informed of your objectives, and rarely are you at a loss. Many of the missions include friendly forces beyond your control, and often they can be of some assistance. You can’t kill them even if you try, though the enemy sometimes can, and in some cases you have to keep them alive to succeed. Friendly soldiers follow you around well enough, but they can shoot your head off when you get in their line of fire. A basic command system might have been in order, or 2015 could have patched up some of the more obvious AI glitches. But overall, your pals are more of an asset than a nuisance.

Unlike Return to Castle Wolfenstein, Medal of Honor leaves out zombies, the occult, cyborgs, and other sci-fi trappings. The secret weapons you encounter are all drawn more or less from history, and the Nazis you kill are all flesh and blood. There are many different types of enemies, from Afrika Korps regulars to fresh-faced garrison troops, to steely paratroopers and vicious SS grenadiers. They all speak German, which adds immensely to the atmosphere, as do the authentic posters and magazines from the era, which make up some of the background scenery.

The weapons feel great, and are among the best sounding guns in any historical shooter. The M1 Garand packs a surgical wallop and has a satisfying sound and impact, while its 8-round clip that you have to exhaust before reloading is a real limitation. The Thompson SMG tosses enemies around like rag-dolls, but lacks range, while the 1903 Springfield sniper rifle is deadly accurate at long range but takes forever to reload. All weapons take time to equip and load, and all deliver an appropriate kick when fired.

This isn’t a simulator, though, so players will have to forgive the fudging here and there, like the ability to carry a truck’s worth of ammunition (such as two hundred sniper rifle rounds, which is admittedly going overkill), generic health power-ups, and characters that are far too durable (including your own). It takes several rifle shots or a quarter SMG magazine to drop an opponent, and even head-shots aren’t surefire kills. The weapons, while looking and sounding great, just don’t feel that deadly; and virtual bullets whizzing by your head lose their dramatic flair. Also bringing down the realism factor is the sheer lack of any spurting stuff from the ventilated Wermacht soldiers. Though rivers of blood have flown in World War II, Medal of Honor drops any hint of visceral gore to secure that coveted Teen rating, making the game feel too arcade as far as depicting combat. A few scripted sequences might elicit unease, like when a pack of virtual soldiers suffer a direct artillery hit and go flying through the air, but no real blood or gratuitous violence is ever really depicted, which makes everything feel much less authentic.

Concluding, Medal of Honor offered an original take on the Second World War despite its substantial amount of arcade. Leading a squad down a Norman lane, then rounding a bend to come face to face with a burned-out German tank surrounded by SS Panzergrenadiersâ€”that’s entertainment. Engaging in a firefight complete with bazookas, machine-guns, grenades, and Tommy-gun assaultsâ€”that’s entertainment. Getting blasted by your squad-mates who don’t have the right mind to move one foot to the side when they shootâ€”ok, not as entertaining. But it’s safe to say that Medal of Honor is a helluva lot more fun than pain. 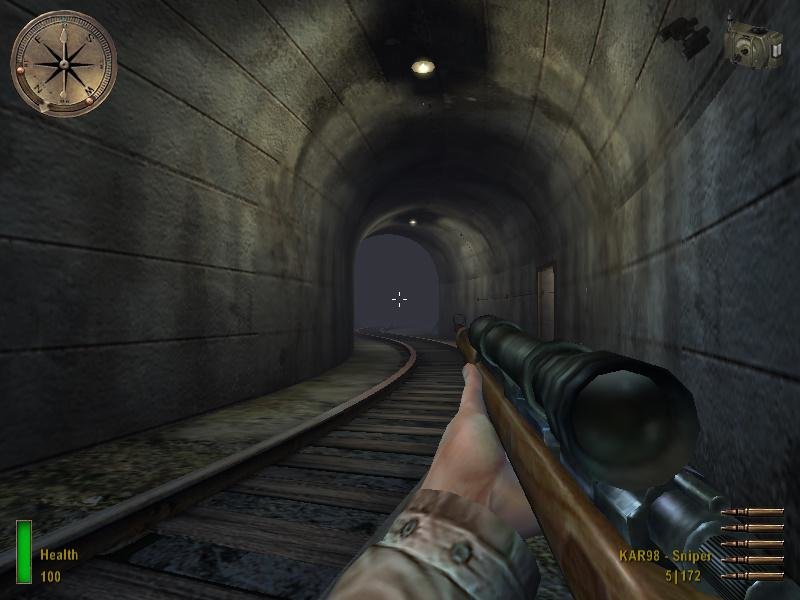