TalonSoft is no stranger when it comes to American civil war titles. They crafted a series of games under the Battlegrounds title, but their approach was overwhelmingly geared towards tabletop gameplay (with stats and details galore) that had none of the touches found in more mainstream 3D strategy titles. American Civil War: Gettysburg, which takes one of the momentous battles of the civil war period, offers a 3D take on the material without sacrificing the strategy.

Of course, 3D strategy titles are a dime a dozen these days. At its core, though, ACWG is still a wargame. Thatâ€™s evident by the fact that every map is divided into hexagonal squares and you cannot stray from the grid. Battles are also conducted in classic turn-based style. Once you give orders to your troops, they are executed in turn. During the execution is where the 3D actually comes into play. Otherwise, in the planning session, your units are represented by icons typical of wargames. As a hex wargame, American Civil War: Gettysburg is not difficult to pick up overall. Wargames typically suggest you need a degree on strategic warfare to play them, but it’s not the case here. There are only several units available: cannon, soldier, militia, cavalry and general. Some of these are available in half or full battalion modes. Two halves, of course, equal a full battalion but separating your troops will allow you to be more flexible on the battlefield. You could use units to bait the enemy or encircle them.

The interface is also easy to grasp. There are some statistics available but youâ€™re given two general indicators of your armyâ€™s health and their morale. When moving, the game will automatically calculate what the terrain will offer the troops occupying the area. In wooded areas, against fences or on hills, you will gain offensive and defensive modifiers depending on the conditions.

This makes positioning an important part of the game. Hills, for example, will be defended because it extends the range and effectiveness of your unitâ€™s fire. Where and how you fire will also have an effect. Charging into your enemyâ€™s rear is a sure way to rout them. All of the units in the game complement each other. Artillery is viciously effective but it requires you to get into range. It is difficult to position and requires an extra turn to fortify and get ready. Soldiers and militia are pretty much the grunts of the game. Cavalry battalions are mobile and can be used to chase units down or flank them.

There are some quirks about the turn-based nature of the game. If you want to fire on a unit, your unit begins firing right as the turn executes. But what if the enemy moves away? Your unit will continue firing on the hexagon the enemy previously occupied. I wasnâ€™t sure whether this was a tactic but it would let me fool the computer by baiting them with a weak sacrificial unit while other friendly units rush in from behind. In single player, ACWG offers a campaign mode that strings together scenarios in chronological order. You can elect to play Union or Confederate sides so that offers some replay value. A skirmish mode allows you to play battles on mission maps with units of your choosing. You can allot a certain amount of points to either side to customize the conflict. There’s also a good deal of documentation included within the game, where you can learn about specific military tactics or just the politics and history of the time. It’s a commendable effort and a decent game, despite the shoestring engine it was built upon. 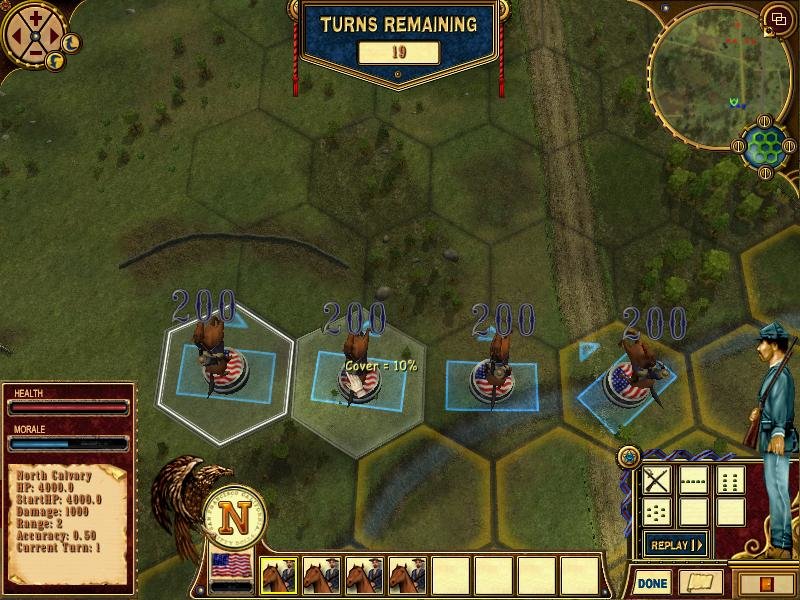