With Azeroth completely bound to the realm of online massive multiplayer gaming for the past decade, it’s sometimes easy to forget that WarCraft traces its lineage back to the top-down mayhem of real-time strategy. Reign of Chaos, otherwise noted for being Blizzard’s first foray into 3D graphics, was meant to revolutionize the genre with innovation, story and impeccable balance.

Expectations were rightfully high, as the heavily publicized production of the game fueled the hype as the years went by. Four balanced races were promised, with a riveting story that would seamlessly tie their collective plight into a single memorable narrative. Clever gameplay design would inhibit rushing tactics that so often ruined multiplayer games. Role-playing elements would be integrated. Special hero units would lead armies and their tactical usage dictated the tide of battle. It would be rendered in beautiful 3D. In short, a lot was promised, and it’s all the more impressive how many of those promises were kept.

Enter The Reign of Chaos 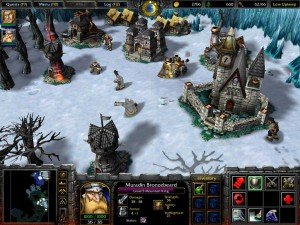 Instead of going for full photorealism, the 3D visuals employ a charming cartoony style.

As with previous RTS games, the four races are superbly balanced and employ very specific playing styles. Whether you’re leading the marauding orcs, vile and expansionist undead, secretive elves or pragmatic humans, the playing field always seems equal and the strategies fresh. Four excellent campaigns tie the main story together, and what an intriguing story it is! The guys at Blizzard skilfully kept everything that was fun in their old RTS games, employing a similarly structured narrative (one campaign for each race) while carefully improving the storyline. For instance, missions here drive the plot flawlessly – every cutscene, line of dialogue or objective feels earned, and everything fits in perfectly.

There’s a great amount of variety as well, shifting between traditional production missions, defense, stealth or squad-based dungeon crawls. Creativity is paramount to keeping things interesting. In one gruesome mission, for instance, you’re tasked with murdering more citizens than the undead can claim. Later you’re trying to sneak a night elf (who can turn invisible) through enemy patrols. In one memorable encounter you’re subjected to a devastating onslaught from an enraged Elven demigod, and must form a pact with demons just to even the odds. What’s surprising is that all of these missions, even the non-production ones, are great fun and well worth going through. Part of this might have to do with the difficulty – the AI is such a pushover on ‘Normal’ that you’ll rarely find yourself overwhelmed, but the spectacle of real-time combat will keep your brain happy regardless. Fortunately, you can change the difficulty between missions if you’re up to the brutal challenge.

Bring In The Heroes

Lots of fundamental improvements characterize WarCraft III, and none lend a greater influence on gameplay than the heroes. They gain experience, level up, cast powerful spells and provide crucial buffs to their units. As you roam around the lands killing enemy troops, you’ll inevitably encounter factionless ‘creeps’, a fancy word describing random monsters populating each map who guard important items or resources. These valuable items, which range from potions to stat-boosting artifacts or magical scrolls, can be carried by your heroes and they pass over from mission to mission. What’s more, it makes you consider what sort of character you’re looking to build as items stack up and you have to decide which are worth dropping and which you should keep. Do you hold on to the +6 Claws of Attack or trade it for a Mana Stone? Such basic but effective role-playing elements give the game new life, and make all of its non-production missions, otherwise dreary affairs in other RTS games, a real pleasure to play. With party-sized tactics reminiscent of Dungeon Siege, these missions serve as surprisingly welcoming distractions. And also unlike other games, WarCraft III makes perfect use of its hero units. 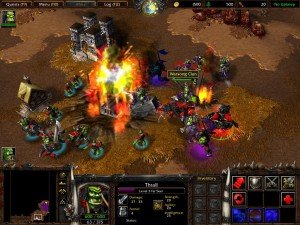 Older titles like StarCraft had special hero units aplenty, but players too often didn’t use them in battle because the risk of them dying was too great, so they stuck them in the back end of town. Akin to Sacrifice, your heroes in WarCraft III can’t die, or at least not as long as your town is standing. When heroes get slain in battle, their souls float up and inhabit the ethereal plains until you revive them at an Altar. It’s a clever idea that works wonders in both solo and multiplayer games, giving players incentive to throw them back into the thick of it without the risk of losing the entire mission should battles end in defeat.

Of slight annoyance is the difficulty balancing, which seems somewhat off. As before, ‘Normal’ barely presents a challenge for anyone that mastered StarCraft, and ‘Hard’ can damn well get too hard at times. For a great while, I couldn’t find my middle ground; skirmish maps, surprisingly, lack a difficulty setting of their own (at least on the unpatched version), and the AI in these games get real brutal. The Frozen Throne expansion and subsequent patching have long mopped up these inconsistencies.

Dungeon crawls such as this are quite fun. 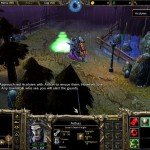 Zoom in the camera for some cool views. 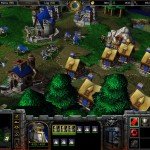 Past the gigantic solo campaigns and skirmishes you’ll find the multiplayer, and it’s no trite matter. There’s a mind-boggling amount of third-party mods and maps floating around. We’ve all heard of Defense Of The Ancients (DOTA), a mod that spawned its own sequel and served as inspiration for League of Legends, another popular online game that needs no introduction. But we’re purely focusing on normal, out-of-the-box WarCraft III gaming, and for that we have BattleNET and GameRanger for fast and fun online play. All of these make WarCraft III a must-have if you’re a fan of RTS games, or are just looking for plain good fun. The cinematic quality is excellent, the story is great and the experience is memorable.