The point where the series started going downhill.

It’s common knowledge that 1990’s Alone in the Dark pretty much defined the survival horror genre. Infogrames tried as much, but couldn’t quite revive the series to the same level of enthusiasm that characterized it during the early 90’s. More recent reiterations of Alone in the Dark didn’t help much either (see AITD 2008 or that god-awful Uwe Boll movie from 2005), but here we have The New Nightmare, a middle-of-the-road sort of game released just before the series went downhill for good. 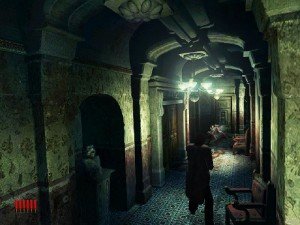 This old place has its share of jump scares.

You play Edward Carnby, paranormal investigator out to unravel the death of his friend, whose murder is linked to an eccentric millionaire living in a secluded island off the coast of Massachusetts. Tagging along with him is Aline, whom we’re told is an anthropology professor. Upon first starting the game, you’re given the choice of either playing as Carnby or Aline, a choice that will not only alter the viewpoint from which you play the game but also give access to different areas, weapons and puzzles. It will slightly change the gaming experience altogether – Carnby is more action-oriented while Aline is better suited for evasion.

It’s a neat twist, but nothing we haven’t already seen before. As in other survival horror games rendered in still shots, you navigate your 3D character through fairly static yet surprisingly well built environments. Characters, enemies and inventory items blend in seamlessly in their respective scenery, never standing out as they do in some other 2D / 3D combos (I’m looking mainly at Resident Evil), and the lighting effects in particular look superb. Aim your flashlight down a dark corner and the beam will cast realistic shadows everywhere, an effect done by superimposing two pre-rendered images. For a game originally developed for the PlayStation, The New Nightmare looks undeniably great.

You’ll spend most of your time exploring the manor and its surroundings, solving puzzles and killing shadowy creatures from another realm. There’s a schismatic plot about dark dimensions, a government conspiracy and Indian rituals, a plot whose backstory is presented through countless books, letters and dialogue between characters. But you’ll probably won’t care much for the story, which is complex but not even remotely compelling. In the end, the game boils down to the puzzles and action sequences.

Alone We Are Not

Unfortunately it’s the ‘killing shadowy creatures from another dimension’ part that will give you the most pains. On the brighter side of things you get a pretty outlandish armory to fight against the forces of darkness, be it Carnby’s signature double-barreled revolver or his triple-barreled shotgun, but keep at it and you’ll eventually find the quadruple-chambered rocket launcher. 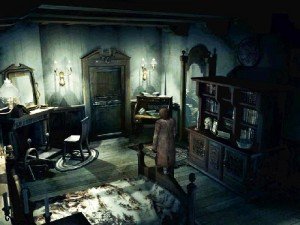 Despite the cool factor, you’ll find that prudent usage of these boomsticks is the better way to go. As in any self-respecting survival horror, resources are just enough to get by. Hellspawn repopulate cleared areas, an annoying gimmick that you’ll face countless times as you scavenge for keys and puzzle items. The lack of supplies will be felt dearly if you’re not resourceful, with careless beginners most likely to trap themselves in a corner. And with no dodging system to conserve ammo or avoid any assorted hellspawn, running dry is equal to forfeiting the entire game.

When you’re not busy surviving you’re out fetching keys, especially when exploring the manor house in the first half of the game (later portions mix things up with more intelligent puzzles, but nothing really revolutionary). A few more creative conundrums involve you and Aline working together, and these do indeed serve to spice things up despite the linearity of it all. Yet one  grinding annoyance sabotaging the key puzzles is the game’s very European style of labeling floors (a system liable to confound and bewilder an American audience). See this explanation on forum.thefreedictionary.com for more info.

The game’s console origins can’t begin to help, or more specifically the lack of proper PC implementation. The resolution is fixed at 640×480 pixels, but more importantly there’s an extremely limited and idiotic saving system. Resident Evil used the same formula to some success, but here it can get downright grueling.

The New Nightmare is overall too much of a headache to fully enjoy. You’re constantly stressed out when fighting monsters, always wondering whether you’ve wasted too much ammo or hit points to make it through yet another close-quarter zombie encounter. The heightened difficulty might entice those looking for a challenge, but it’s just as liable to entertain as it is to annoy.