Based solely around the fire-breathing V-10 powered Dodge Viper, Viper Racing doesn’t use any real-world tracks. The modest eight included tracks range from good to bland. There are a couple of niceties thrown in for variety, but most are street or road courses littered with superfluous trackside objects like light poles, park benches and trees that do little but reinforce the more arcade aspects of the game. And with only one car model available, there’s not much pressure in finding the best vehicle to race with.

If the tracks aren’t particularly exciting, the actual handling of the vehicles compensates. The “arcade” mode produces the most satisfying handling, allowing you to toss the car around with wild abandon while retaining its feelings for over and understeer. This isn’t an arcade game, however. Plenty of tuning options are available, and they have a discernible effect on the balance and handling of the car. And while having only one car does mean less variety, it puts greater emphasis on out-tuning the competition. Unlike most games with licensed cars (such as Need for Speed), Viper Racing has a full damage model. Fenders wrinkle, suspension pieces break and you can catch air (too oftenâ€”no one would design a track where cars would break their suspensions because they get airborne at speed). You can also create staggeringly ugly cars by using the and integrated paint program. A set of templates allows subtle effects like full-body flames, and the high-color artwork means you get to choose from a full palette of colors.

While initial races may leave you unimpressed, digging into Viper Racing reveals a more complex game. In many respects, it’s more complex than your standard NFS arcade racer, if not quite as fun overall. 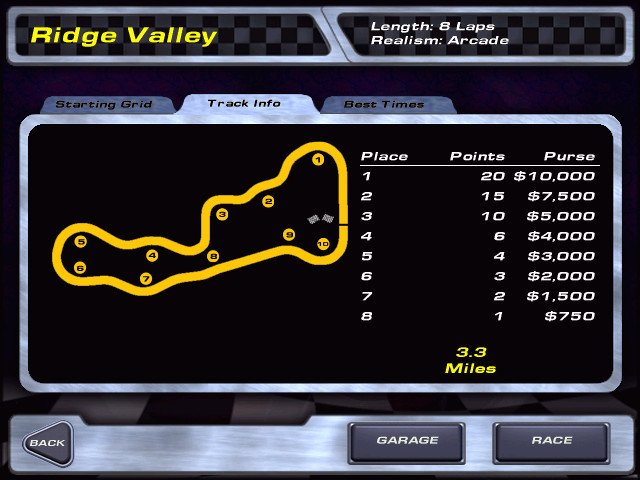