Twisted Metal 2 is the PC conversion of the PlayStation game, and as such shares most of the features of its predecessor – serious action, decent visuals and questionable long-term singleplayer gameplay within the eight environments. As a nice extra specific to the PC version, the game also includes multiplayer. The gameplay in Twisted Metal 2 is basically a vehicular version of Doom. Dump a bunch of weird cars in a small-ish environment, littered with all types of power-ups and additional weapons, and let them blow the hell out of each other until one is left. There’s nothing in the design you haven’t seen before. Similar games like Carmageddon pulled off this design with slightly more flair, but there’s no denying Twisted Metal 2 has its own style and pretty well executed gameplay.

In the game’s favor, the bizarre vehicles are quite distinctive from one another, each with their own special attacks. Too bad the physics aren’t different from vehicle-to-vehicle â€“ of course to do that there’d probably have to be some actual physics in the game. In the Twisted Metal world, cars handle like their in space. If the physics of Carmageddon were dropped into this engine, you’d have a pretty bloody fantastic game. But even with its lunar feel, Twisted Metal 2 is still a fun game to crash and burn in.. 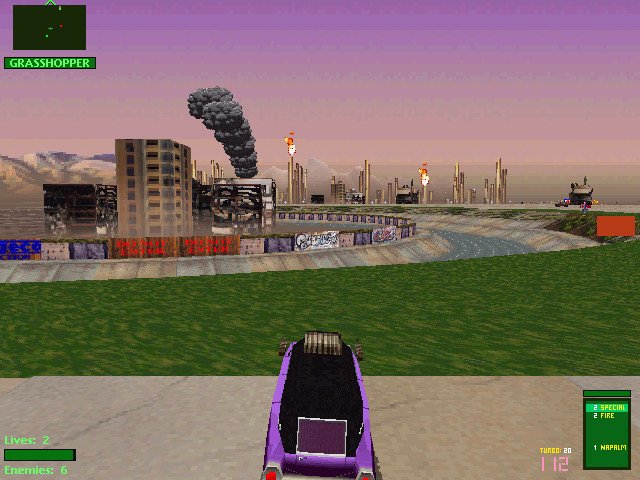