Return to an age of polyester jump suits and blow-dried hair, of progressive rock, punk, funk and M.A.S.H. Not many games have set their sights on depicting the 1970’s – looking back it might not have been the most culturally significant decade to begin with – but cheesy style and angular muscle cars there were plenty, and Activision’s Interstate ’76 has both in equal measure. This 70’s-esque car combat and driving game is considerably better off than the TV cop shows it repeatedly pokes fun at. Put together by Activision’s Mechwarrior II team, Interstate ’76 is set in a rather grim Mad Max-ish American Southwest where mercenaries have taken control of the highways in killer muscle cars totting mounted rocket launchers and machineguns. The seventeen mission singleplayer campaign has you star as the aptly named Groove Champion, out to deliver justice on account of his sister getting gunned down by the leader of the muscle car gang.

The story and cut scenes are brilliant, if in a kitschy Starsky & Hutch kind of way. Each mission is presented like a bad, hour-long TV show, where inevitably it’ll end in an explosive car chase. There’s plenty of corny dialogue, polygonal afros, and lots of powerful cars. Not since LucasArts’ Full Throttle has a game maintained such a singularly unique style, with its purposefully low-poly rendered cutscenes and sleek atmosphere overall. While the game may prey on one’s nostalgia, there’s no denying it’s got style.

Although not going out of its way to be realistic, I76 nonetheless sports a sophisticated, sim-like range of controls and physics modelling. Driving the car and taking sharp corners shakes you around a lot, you can take damage and eventually will lose vital components – take too much and your Picard Piranha lights up like a highly volatile Christmas tree. There’s a minigame between missions where you can salvage wrecked components and outfit your car with better parts, but this aspect can be completely bypassed so you can ultimately focus more on the action. The controls and interface are almost flawless, with an included padlock and several external views, a targeting system, an intuitively designed HUD and controller support. The action is fun but the AI isn’t quite up to code. Opponents do stupid things, like run repeatedly into mountains if they’re in the direct path to your car (assuming they’re not already stuck driving up the side of it). All of the missions are trigger-driven, so if you figure out an alternative way to beat something, you’re out of luck, because you haven’t completed the mission the way the game thinks you should. Lastly, most of the enemy cars aren’t aggressive or consistent enough in their attacks, tending to drive around haphazardly or seemingly turning tail even they have you in their sights. It all feels overtly choreographed.

One last bug worthy of mention is a sound-related system glitch that prevents mission progression, but which may be fixed by visiting this thread on the official forum. Doing otherwise might end up freezing the game after completing each mission, but I’m not sure if this is the game itself or if the problem is linked to my sound card drivers in Win98 (several others seemed to have met the same issue).

Still, I76 is consistently fun and clever on the whole. Minus the wayward saving feature and spotty AI, this game is brimming with solid action and good design, not to mention its own brand of retro quirkiness. 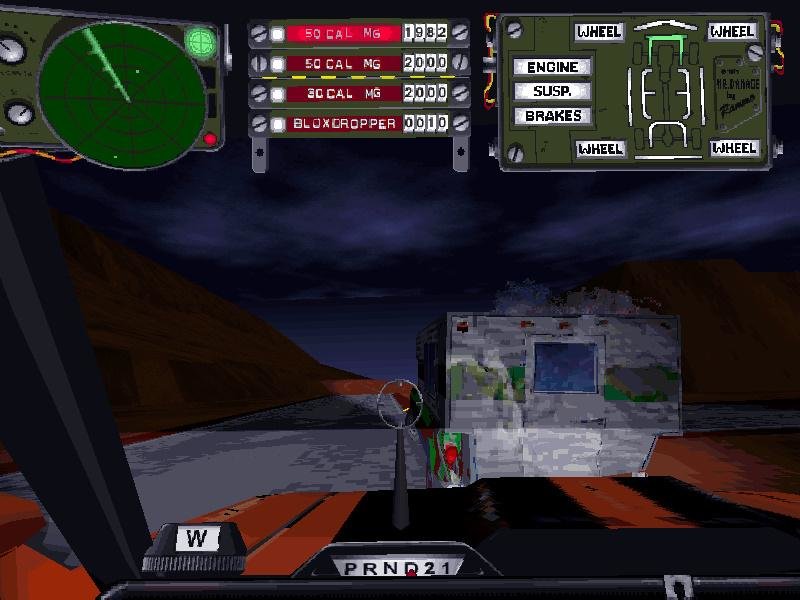