There’s gold in them darn hills. ome of us might remember a time when games weren’t limited to molds, and companies had free reign to experiment with all manner of weird ideas. Such was the case with Yukon Trail, which, if it were part of a genre, would conceivably be branded an ‘expedition simulator’. Your goal is to organize and engage in a gold mining expedition during the great gold rush of the late 1890s, ensuring you have enough supplies to make it through the adventure and in time before all of that precious Klondike gold is exhausted.

Yukon Trail is an extremely short game – you can wrap it up in less than an hour if you’re in a hurry – but it offers a great deal of freedom along the way. Every decision – from which character you choose as a companion to what gear you decide to buy – has a subtle impact on how the rest of the game plays out. There are only two essential resources to keep track of in your race up north, and both of them will be in scarce supply. These resources are time and money. Time is an obvious commodity – you’ll be racing against a stampede of other would-be gold hunters, and as such you’ll have to make the best decisions that will get you up north as fast as possible. Money will be in scarce supply as well, since you’ll be spending a lot on essential things like food and survival gear. There are a bunch of minigames along the way that will earn you extra cash, thankfully – card games and other gambling activities – though you’ll have to watch your back when dealing with the shady characters organizing them.

Yukon Trail is as interesting as it is odd. The game isn’t extremely ‘fun’ in the traditional sense – it’s borderline edutainment in some aspects – but there’s definitely a strange sort of charm tucked inside of it that managed to make me play through it several times. I was always eager to see how my decisions will impact on the rest of the expedition, and what I could do differently to strike it rich faster and more efficiently. 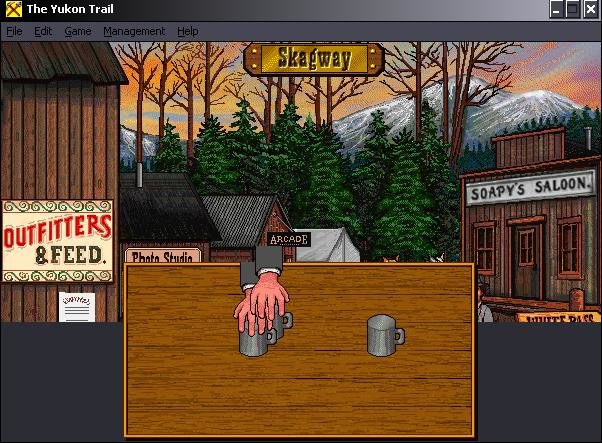