The Star Trek Omnipedia is an impressive compilation of information the most devout Star Trek fan (or Trekkie) could want to know about the venerable franchise. The material is organized in several sections, or modes, including Encyclopedia, Episode, Chronology, Resources, Topics and Search modes. The shining core of the reference title is the Encyclopedia mode where thousands of entries on Trek trivia can be found. The entries are cross-referenced and some have other types of multimedia accompanying them.

The Episode and Chronology sections contain helpful databases of episodes, movies and notable events that cover about 15 billion years. In Chronology mode, you find information from “real” Earth as well as historical data presented in the Star Trek universe. The paths diverge in the late 20th century as there has been no eugenics war yet and World War III hasn’t occurred. The information is presented by date only and doesn’t lend itself to easy browsing.

The Resources mode is the most entertaining section as it contains a great deal of trivia. Unfortunately, the trivia isn’t always presented accurately and, in some cases, there’s just not enough information. At first glance, one wonders if the five narratives in the Topics segment are really necessary and a unique section on each seems somewhat redundant. Nevertheless, the narration by Mark Lenard is superb, which makes them worthwhile after. 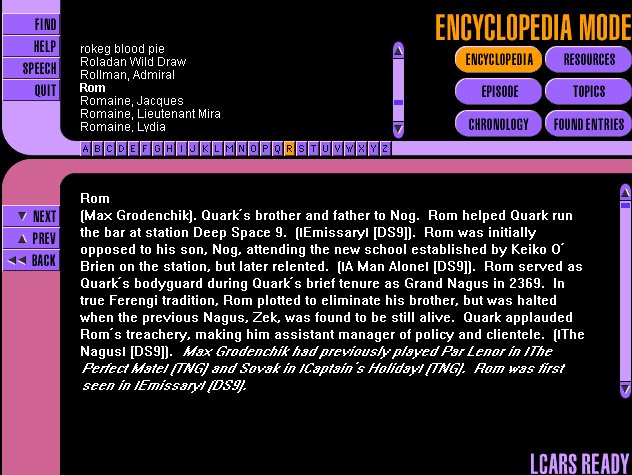