A Myst clone with a pulse.

In Journeyman Project 3: Legacy of Time, players once again take on the role of Temporal Agent Gage Blackwood. Though Gage staved off certain disaster at the hands of Agent 3, his ruthless nemesis and confessed Maybelline cosmetic scalper, he did so at a terrible cost. Arthur, his autonomous time buddy and artificial intelligence (erring more towards the “artificial” portion of his job title), was snatched into the time stream and presumed lost forever.

As Legacy of Time begins, a government shutdown of all time jumps forces Gage to assume command of the spaceship he’s stationed on while the captain pleads with the Consulate to lift the ban. During the captain’s absence, a dangerous temporal rift forces Gage to initiate an unauthorized jump with the un-christened, experimental Chameleon jumpsuit. There, he observes a trail of clues left by none other than Agent 3 herself, who reunites him with Arthur to deliver an important message. In tracking Agent 3 down, Gage makes a horrifying discovery that warps the past and could very well destroy the future.

The game centers around three lost civilizations: Shangri La, Atlantis, and downtown Detroit. Actually, make that last one El Dorado. Not only are all three major locations rendered in awe striking detail, they’re also rendered in multiple time periods. Movement in the game still follows the “node stepping” system, where every click in a direction moves the viewpoint a certain distance forward. By adding more nodes than ever, and shortening the distance between nodes, players capture much more of the beauty of these worlds. A hefty portion of these nodes exist for show, rather than for plot purposes. Given the breathtaking quality of the imagery in Legacy of Time, the extraneous sightseeing points are welcome additions to the game.

The first shock gamers will encounter comes from the newfound freedom to absorb their entire surroundings. In all honesty, most adventure games follow one overused recipe: open a box of “Bisquick Adventure Game Mix,” add scanned photographs, stir in hot spot editor, bake until bored. Serve cold.” In contrast, literally nothing in Legacy of Time feels static. Thanks to a technology called “Smooth Move,” every stopping point in the game can be pivoted 360 degrees in any direction. This viewing system adds an incredible sense of continuity, blending the surrounding areas seamlessly. As an example, one moves smoothly inside a lighthouse, ascends the spiraling staircase, and stares out from the top of the tower at a vast island viewable in all directions. In short, it’s immersive.

From start to finish, this game does it all. The streamlined interface melds transparently with the game so that you’re never forced to turn your attention away from play. Sometimes players will need to navigate across several nodes (with nothing particularly important between them). When this happens, holding down the left mouse button will propel them continuously across great distances, eliminating unnecessary mouse clicks. Previously viewed cut scenes can be replayed at any time to search for clues in their dialogue. Legacy of Time’s puzzles are tightly woven into the story. As an example, one situation calls for a series of gears to be planted into the gearbox of a windmill. Doing so allows Gage to turn the windmill just enough to create a makeshift bridge onto the cobblestone walls surrounding Atlantis. In another puzzle, Gage mimics the identities of other characters to gain needed information. Another easily overlooked feature, but one that makes a substantial impact, is the attention to feedback for the player’s actions. Simply put, you’ll never wonder if an action had or did not have a direct impact on the game world somewhere.

Sure, the Myst clone has been done to death, but this doppelganger definitely has some steam. It’s an adventure game with a well designed interface, thoughtful puzzles and a good story, all of which help make it an above average, and occasionally even great, point and click adventure. 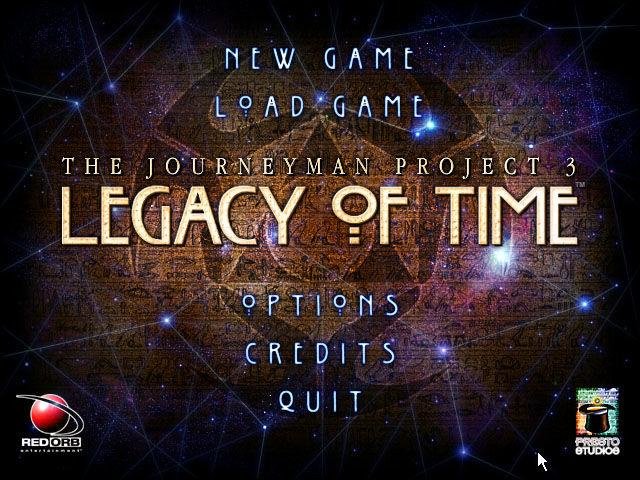