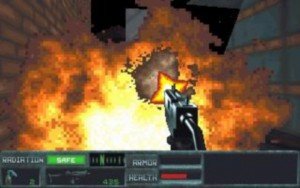 As the title hints, the DOS-dated Terminator: Future Shock pits you as a resistance fighter battling the mechs controlled by SkyNET. If you have seen any of the movies you know the storyline. The setting is Los Angeles of 2015, and the affects of SkyNET’s uprising in 1990 has rendered most of humanity dead. All around is death and decay (what else would you expect), with shattered remnants of a past society lying all over.

At its base code, Future Shock is a Doom clone with a few added enhancements. Full 3D graphics and Mouselook offer perhaps the most notable gaming upgrade, and beyond that you get the consistent post-apocalyptic setting. You fight mechs a lot, everything from airborne threats, tanks, and of course T-1000 and T-8000 Terminators.

The gameplay is better than the average Doom clone, with little tricks throughout the first few levels in order to pass them without resorting to the usual kill everything mentality. Each mission has a direct purpose, not just to escape the maze. The game not only incorporates a first person perspective from your vantage point, but also that of you behind the wheel of a jeep and later on in the game, an assault aircraft. This gives you more firepower and more weapons, another of Future Shock’s strong points.

The AI in the game is effective for its purpose. Mechs will go after you with reckless abandon if you are not careful. The T8000 is especially hard to get around because it operates just like you and can do the same things to get you as you do to escape it. Some of the enemies have more than just guns to assault you with. The Spider Bot for instance will impale you with it’s jaws if you get to close to it as well as shooting lasers at you.

The biggest letdown here is the missing multiplayer. The game would be awesome as a network play due to the terrain which consists of valleys and mountains, and multiple obstacles to hide behind. Also the fact that it is a wide open area with no enclosed walls at all would make it lots of fun, there would be almost no cornering of people at all. It took some time for the sequel to remedy that problem, but until then what you have here is an above average Doom shooter with a few cool ideas.