After about a decade of duding through horrible 3D ‘cartoon’ graphics, here we finally have a game based on an animated show with proper cell-shaded visuals to do justice to its source material. That’s pretty much the first thing you can notice in Taz: Wanted, a platformer which fully uses the Looney Tunes license, and which of course bears a special focus on its namesake dimwitted marsupial, Taz.

On first glance, the game has all of the markings of a winner. Funny cartoon characters, cool graphics (including great animation), sounds, music and decent platformer action all help in this regard. The story starts when Taz gets captured by Yosemite Sam, and is wound up getting displayed in his theme park. He escapes the cage in the intro movie, but has to go through a gauntlet of levels with various switch puzzles, bonus pick-ups and side objectives (such as destroying the ‘Wanted’ posters peppered throughout each level). Along the way he has to constantly avoid the pesky security guards out with nets who are eager to nab him, as well as other assorted critters and hazards that are found within the park. One of the curious cases with Taz: Wanted is that it’s not a terribly difficult game as far as the action is concerned. The reason for this is because you don’t really lose the game when Taz does something fatal. If you drown, for instance, you get teleported back to a safe area where you can attempt the jumping puzzle again. Get captured, and you’re thrown in a cage nearby (which you can easily brake out of using the spin attack). This makes the game a whole lot frustrating, but also less interesting since there are no real stakes. If you continually fail at a level, you can simply quit and try another level.

The only real issue with the game are control-related, though it’s not really that bad. Shortly put, the camera isn’t always your friend as you navigate each level. At times it won’t switch fast enough to a certain angle, which can make jumping pointlessly hazardous. There’s an optional first-person view that lets you examine your surroundings, but a camera reset key would have been golden as well. In all, it’s a bright, funny and pretty entertaining fun. It doesn’t quite have the tension since you’re never in danger of ‘losing’ in Taz: Wanted, but if it’s an easygoing platformer you’re looking for, then it’s a safe bet. 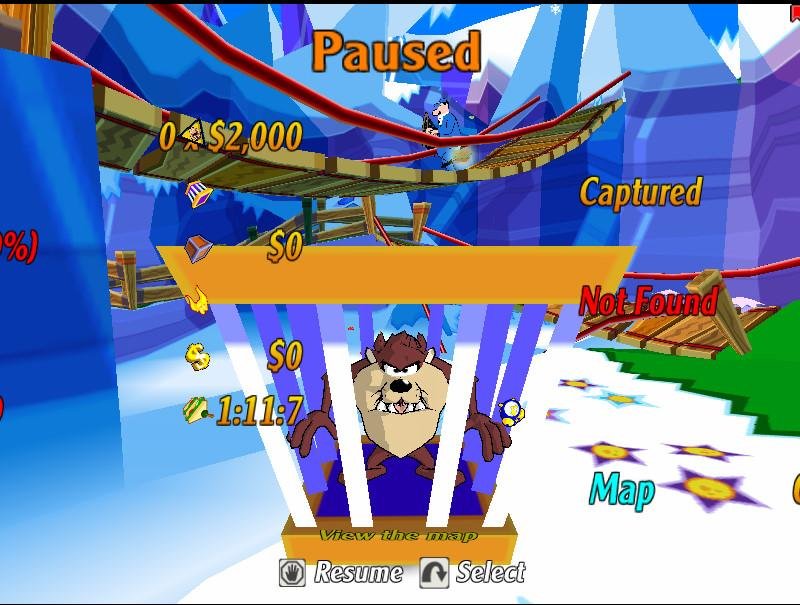