Nothing beats an interplanetary war in Blizzard’s timeless classic. There are few companies that can sell games on reputation alone, and Blizzard Entertainment is one of them. Although StarCraft was by no means set to revolutionize the strategy genre, it does serve as hallmark for balanced gameplay, great story, excellent controls and pure fun. It was not the be-all end-all game many Warcraft II fans were hoping for at the time, but it never really had to to be; the game’s nearly twenty years in age and is still played online. The controls are so great that anyone with a passing familiarity with real-time strategy can jump right in.

Three races are out to wreak havoc upon each other as part of a thirty mission singleplayer campaign, each with its own campaign and perspective on the arching storyline. These races number the practical if hopelessly sectarian Terrans, the swarm-like insectoids known as the Zerg and the ultra high-tech Protoss. What’s cool is how distinct all three races are, and not just the way they look or sound, but also in the way they play. If you’ve played Warcraft III: Reign of Chaos, then this should strike you as instantly familiar. The Terrans, for instance, are a migratory bunch and as such can detach and hover their buildings to a new area. They rely on some pretty advanced units but don’t mind churning up disposable ground troops either. The Zerg are completely biological and operate according to swarm logic. Instead of training their units at a barracks, they have colonies that produce larvae, that transform into eggs, that hatch into combat units. The Protoss couldn’t be more different, as they rely heavily on high-tech weaponry. You’ll get to experience the story from all three perspectives.

Starcraft provides a solid foundation of features to help you control a force, but it does not have a lot of the additional functionality seen in other games. There are no unit formations or autonomous search and destroy commands. This may be viewed as a drawback by some, but there are advantages to this approachâ€”it keeps the game from being overly complex, and there’s actually a great deal of elegance in its streamlined design.

On top of the interface, the game’s maps and individual missions pan out very nicely, offering a lot of variation combined with clever scripting. Forest, desert, space platforms, and sprawling buildings are included in the game, all with varying terrain heights. The environment can be interactive; gates lower for troops and transporters beam forces across the map. Use of terrain features is crucial while playing. For example, a group on higher ground has enormous advantages in range and accuracy over its enemies.

Both the sound and visuals are fabulous. The game is played from the standard isometric perspective that RTS gamers have come to expect. The units are two-dimensional sprites, and compared to other games of this genre, they appear bigger and more brightly colored. This has the effect of making them easier to see and control, but also adds the aforementioned cartonish quality. The terrain is also very two dimensional looking, without rolling hills or jagged cliffs. The artwork makes terrain heights clear, but does not have the graphic flair offered by a more three-dimensional engine (such as those found in Total Annihilation and Myth: The Fallen Lords). Although not as technically advanced, the visual style and graphic design that went into the game is most definitely exquisite, and does a great job at establishing StarCraft’s visual identity.

Many products have made good graphics their top priority, neglecting playability. Not so with StarCraftâ€”Blizzard provides us with extensive single-player campaigns with solid plot lines, unique missions, and plenty of cut scenes to draw the player in. Several pages of the manual are dedicated to explaining the histories of each race and establishing the plot. From this basis, there are three full-length campaigns, one for each side. These follow the standard linear sequence of missions format. Also included is a nice interactive tutorial. StarCraft is far from the multiplayer-only platform many games are. It exceeds expectations in both departments. The Protoss building their base. An important part of any single-player game is the quality of the artificial intelligence, a property that has generally lagged behind other advances. In StarCraft, the AI is passable, but not spectacular. Enemy forces generally do not trickle into your base; the computer will attack suddenly and with force, and troops that retreat get repaired when possible. However, computer controlled units still tend to assault overly powerful defensive structures only to be mowed down by the score. As for unit movement paths, they are quite good.

If there’s any one great fault here it’s caused by the interface; first by the limited 640×480 resolution, then by units frequently getting lost from control groups after recovering from a Stasis Field or Lockdown (enemy attacks that render your troops temporarily immobile and useless). In the middle of combat, it’s more than a minor annoyance. The Zerg make good defensive units. They can burrow into the ground and surprise attackers, but are slow to expand their base.

StarCraft offers a full array of multiplayer features. Included is the option to do teamplay missions, where teammates can share vision, resources, technology, and control of units. If you want one player to be solely responsible for base building and goods collection while the other attacks, you can do it. Also provided are options like capture the flag, slaughter (see who can kill the most units), and greed (a race to obtain the most materials.) The multiplayer game is beautifully balancedâ€”with three completely different sides, it is usually extremely difficult to create an equal game. However, with StarCraft, no one side is all-powerful. This gives gamers the freedom to play whatever side they wish.

Overall, StarCraft is an excellent game. Its well-developed plot, unique races, intuitive interface, and excellent campaign editor make it worth the price of admission, especially for those familiar with Warcraft but also RTS gaming in general. Blizzard took everything it learned from its years in this business to create a very well-rounded game, one that excels in execution, polish and overall playability. 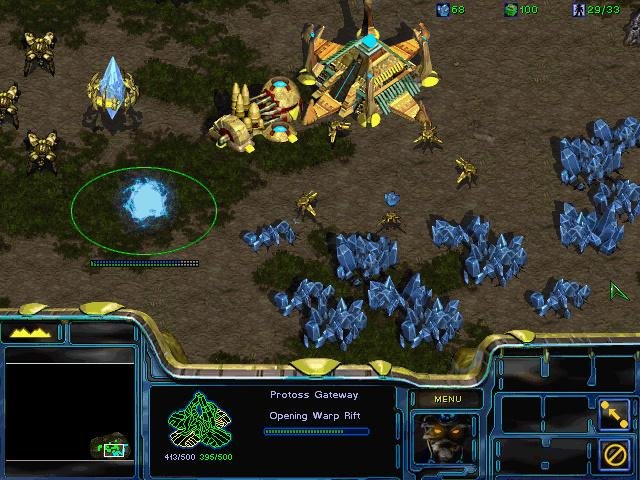